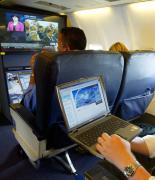 WASHINGTON (AP) — U.S. and British officials said Tuesday the decision to bar laptops and tablets from the cabins of some international flights wasn't based on any specific threat but on longstanding concerns about terrorists targeting jetliners.

WASHINGTON (AP) — The U.S. and British governments, citing unspecified threats, are barring passengers on some international flights from mostly Middle Eastern and North African countries from bringing laptops, tablets, electronic games and other devices on board in carry-on bags.