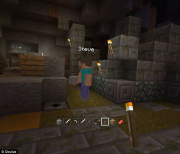 Great Fire of London to be recreated in MINECRAFT: Virtual world will portray tragic blaze that swept the city 350 years ago

Minecraft gets the full virtual reality treatment: Hit game lands for Oculus Rift ahead of the headset's UK launch

Lovers of sandbox explorer game Minecraft will be able to lose themselves in its world of blocky graphics, as the game launches on the Oculus Rift. Global Xbox and PC users with the headset already playing the game will be able to get a free Windows 10 beta update to enter into the VR world. The game is one of the first big titles to launch on the much hyped Facebook-owned Oculus Rift, which is set for its European launch next month. Minecraft's developer, Mojang, trumpeted the game's arrival with an excited blog post: 'How's your face? Is it ready to have Minecraft right up in it?

You Can Now Play Minecraft In Virtual Reality

Be careful reading this post around any kids in your vicinity (or any constructive gamers, for that matter): as of today, it's now possible to play the official version of Minecraft in virtual reality. We've seen a few half-baked VR versions of the popular pixellated open-world building game, but those were just projects that were hacked together as demos and proofs-of-concept. Now Mojang, the gaming studio that makes Minecraft and which was purchased by Microsoft for 2.5 billion in 2014, has unveiled a version of its hit title specifically designed to work on Samsung's Gear VR headset. Except this version has been optimized to display correctly on the stereoscopic lenses of the Gear VR headset. Mojang says that a promised Oculus Rift version of its hit title is still on the way later this year.

If you still think Minecraft is a PC game--well, you're flat wrong. According to new numbers released by Mojang and Microsoft, the original version for the PC is the least popular platform, in almost every region worldwide. Microsoft said Thursday that Minecraft has sold more than 106,859,714 copies to date across all platforms--which would represent the twelfth most populous nation in the world, right behind Japan. Four copies have even been sold into Antarctica. But if you dig into Microsoft's numbers, they reveal that far, far more users are buying Minecraft on platforms other than the PC.