Dozens of deaths during stampede at Ethiopia religious event

Authorities detained Sadyr Zhaparov, who Kyrgyz media say plans to run for the presidency, when he returned to the country earlier on Saturday after spending three years abroad in self-imposed exile. He faces charges of taking hostage a government official in 2013. 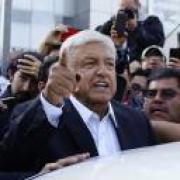 ISTANBUL – Turkey's lesbian, gay, bisexual, trans and intersex activists gathered Sunday for an LGBTI pride march in Istanbul, moving from street to street for an hour as police tried to end an event the local government had banned for the fourth year in a row. Hundreds of people chanted slogans and waved rainbow flags on side streets along Istiklal Avenue, Istanbul's main pedestrian thoroughfare. The organizers released a statement saying the city's ban would not deter them from marching peacefully. Despite the ban, police allowed the organizers to read a press statement. "We do not recognize this ban," the group said in the statement read out loud by a volunteer, calling the prohibition imposed by Istanbul's governor "comical."

NAIROBI (Reuters) - Two people were shot dead on Friday as Kenyan police tried to disperse opposition supporters marching from an airport alongside the convoy of opposition leader Raila Odinga, a Reuters witness said.