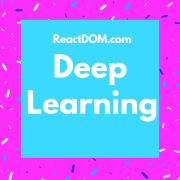 BESTSELLER, 4.7 (143 ratings), Created by Lazy Programmer Team, Lazy Programmer Inc. English [Auto-generated] It's been nearly 4 years since Tensorflow was released, and the library has evolved to its official second version. Tensorflow is Google's library for deep learning and artificial intelligence. Deep Learning has been responsible for some amazing achievements recently, such as: Generating beautiful, photo-realistic images of people and things that never existed (GANs) Beating world champions in the strategy game Go, and complex video games like CS:GO and Dota 2 (Deep Reinforcement Learning) Self-driving cars (Computer Vision) Speech recognition (e.g. Siri) and machine translation (Natural Language Processing) Even creating videos of people doing and saying things they never did (DeepFakes - a potentially nefarious application of deep learning) Tensorflow is the world's most popular library for deep learning, and it's built by Google, whose parent Alphabet recently became the most cash-rich company in the world (just a few days before I wrote this). It is the library of choice for many companies doing AI and machine learning.

So these are the Best Machine Learning Courses and Best Deep Learning Courses will make you stand out from others and help you earn those extra hundred thousands of dollars. In this era, everybody needs to scale up their skills. And I wish you best of luck on your journey to upgrade your skills set.