Drones In America: First Passenger Drones Set To Hit The Skies Above Nevada

Look! Up in the sky! Is it a bird or is it a plane? If you're in Nevada, it could be the world's first passenger drone. The electric Ehang 184-passenger drone has been given clearance for testing in the airspace above the Silver State, the Guardian reported Wednesday. The drone can carry people inflight for 23 minutes.

EHang 184, the world's first passenger drone, capable of autonomously carrying a person in the air for 23 minutes, has been cleared for testing. The approval was given out by the Nevada governor's office to develop and test the vehicle at the state's Federal Aviation Administration-approved drone test site. The electric EHang 184 passenger drone by Chinese firm EHang was unveiled at CES in Las Vegas in January. The Chinese company said that the EHang 184 Autonomous Aerial Vehicle (AAV) is a 142-horsepower "personal flying vehicle" that can transport a single person at an altitude of more than 11,000 feet, China's People's Daily Online reported. According to BBC, Macquarie consultancy senior analyst Douglas McNeill gave his opinion of the flying drone concept.

The giant drone in the desert: China's revolutionary Ehang 184 passenger carrying craft set to be tested in Nevada

It took the technology world by storm when it was announced at CES in Las Vegas. Now a Chinese firm that has build a self flying'passenger drone' says it could soon begin testing in Nevada. The Nevada Institute for Autonomous Systems, a state nonprofit group sponsored by the Governor's Office of Economic Development, will work to help EHang test and develop its system, officials said Monday. EHang and Lung Biotechnology hope to use 1,000 drones to deliver artificial human organs to hospitals around the US. The all-electric vehicle has four arms with a total of eight propellers at the end. 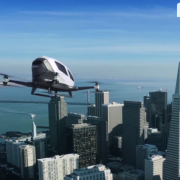 While many companies are racing to perfect autonomous driving technologies, no one really meddles in the "flying drone taxi" category. But now, that may change. The world's first passenger drone capable of autonomously carrying a person in the air has been given clearance for testing in Nevada. A Chinese company called EHang, the Nevada Institute for Autonomous Systems (NIAS), and the Governor's Office of Economic Development have all partnered to put EHang's drone through testing and regulatory approval. The drone--the electric Ehang 184 passenger drone--premiered in the 2016 Consumer Electronics Show in Las Vegas this January.