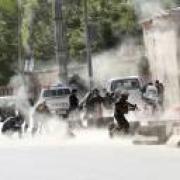 BRUSSELS – World powers involved in the Iran nuclear agreement expressed regret Tuesday at President Donald Trump's decision to pull the U.S. out of the landmark pact amid concern the move will undermine efforts to stop the spread of atomic weapons. Signatories to the 2015 deal to curb the Islamic republic's nuclear ambitions urged Trump not to fundamentally undermine the U.N. Security Council-endorsed agreement so that the other parties -- Britain, France, Germany, Russia, China and Iran -- can continue to respect it. But Israeli Prime Minister Benjamin Netanyahu praised the U.S. president's decision as "a historic move." Netanyahu has long been an opponent of an agreement that he said would never remove the danger of Tehran developing nuclear weapons and whose recent revelations about intelligence showing that Iran has lied about its program was cited by Trump as one reason to pull out. "It is with regret and concern that we, the Leaders of France, Germany and the United Kingdom take note of President Trump's decision to withdraw," French President Emmanuel Macron, German Chancellor Angela Merkel and British Prime Minister Theresa May said in a joint statement after discussing the move.

Emergency services personnel complained Sunday about the "disgraceful" behavior of a small number of supporters who celebrated England's victory over Sweden by dancing on top of an ambulance and badly damaging it.

Rodrigo Denardi Vicentini was picked up on an international arrest warrant after watching his country beat Costa Rica 2-0 in St Petersburg on Friday. He is wanted back home for a series of gang robberies targeting post offices last year, according to local Russian court documents.

Overall, Russia has rolled out exceptionally high security measures for its first-ever World Cup, coordinating with law enforcement from around the world. The measures can seem heavy-handed -- fans forced to walk nearly a kilometer (half a mile) to enter a stadium, Cossacks roaming on horseback, riot police watching over night club parties. Officials say they're just trying to ensure that fans can safely have fun.