Syntiant Corp., the "neural decision processor" startup, announced completion of another funding round this week along with the shipment of more than 1 million low-power edge AI chips. The three-year-old startup based in Irvine, Calif., said Tuesday (Aug. 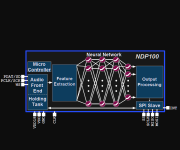 Syntiant, a startup developing AI edge hardware for voice and sensor solutions, today closed a $35 million round. CEO Kurt Busch says the funds will be used to ramp up production throughout the remainder of 2020. According to a report published by Meticulous Research, the speech and voice recognition hardware market is expected to reach $26.8 billion by 2025. That's because devices like smart speakers, smart displays, phones, headphones, hearing aids, and laptops require low-power chips to process utterances. While some system-on-chip offerings sport coprocessors to handle voice recognition, they're often not able to accommodate multiple form factors. Three-year-old Syntiant, which is headquartered in Irvine, California, provides hardware that merges machine learning with semiconductor design for always-on voice applications.

You may have never heard of Syntiant, an artificial intelligence chip startup initially targeting voice interfaces. But you have probably heard of the technology companies that on Wednesday invested $25 million in the startup's second funding round. The investment was led by the venture capital subsidiary of Microsoft. It was joined by Amazon's Alexa Fund, Intel, Motorola, Robert Bosch and Applied Materials. The Irvine, California-based Syntiant is tapping into the growing voice assistant market powered by Amazon and Google.

Syntiant, an Irvine, California-based startup with big name backers like Intel and Microsoft, said its custom chips could be used to push Amazon's Alexa into smaller, battery-powered devices like wearables and wireless headphones that wake themselves up when they hear the voice assistant's wake word or other commands. Amazon just approved its deep learning accelerators for use with Alexa Voice Services (AVS). The company's NDP100 can be programmed to continuously listen for 64 wake words or specific sounds--like glass breaking or a baby crying--with power consumption in the range of 150 uW and more than 100 KB of SRAM. "These chips are purpose-built for keyword spotting such as wake words like Alexa, and now our processors can be used for quickly developing voice applications in battery-powered devices," chief executive Kurt Busch said in a statement. Syntiant, which was founded by former engineering executives from Broadcom, has raised over $30 million in funding from investors including Microsoft's M12, Amazon's Alexa Fund, Applied Ventures, Intel Capital, Motorola Ventures, and Robert Bosch Venture Capital.

Voice-focused deep learning tech firm Syntiant has notched $35 million in a Series C funding round. Applied Ventures, LLC and M12, the venture fund of Microsoft, headed up in the financing, according to a Tuesday (August 4) announcement from Syntiant.Alpha Edison, Miramar Digital Ventures and Atlantic Bridge Capital also came on board as new investors in Syntiant.Syntiant CEO Kurt Busch said in the announcement, "It is a tremendous honor to know that some of the world's leading tech investors are supporting our growth stage, as we deliver our deep learning voice solution to customers across the globe."Syntiant, Its neural decision processors (NDPs) have become a part of the design of a broad array of devices powered by batteries like smart speakers, notebooks, headphones and smartphones.M12 Managing Director Samir Kumar said in the announcement, "Syntiant's class-leading power performance is making an ambient fabric of neural network-powered intelligence at the tiny edge a reality."According to Syntiant, the market for speech and voice recognition is anticipated to arrive at $26.8 billion by 2025, citing a Meticulous Research …