A group of former US national security officials are set to release a statement arguing there is no justification for US President Donald Trump to use a national emergency declaration to fund a wall along the US-Mexico border. The statement, which was reviewed by The Associated Press, has 58 signatures from prominent former officials, including former Secretaries of State Madeline Albright and John Kerry, former Defense Secretaries Chuck Hagel and Leon Panetta and former Homeland Security Secretary Janet Napolitano. "There is no factual basis for the declaration of a national emergency," the statement reads. It argues that border crossings are near a 40-year low and that there is no terrorist emergency at the border. The president maintains that a wall is needed to stem irregular immigration and the flow of illicit drugs into the country. 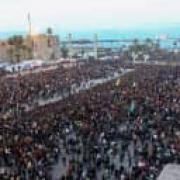 WASHINGTON - California will "imminently" challenge President Donald Trump's declaration of a national emergency to obtain funds for a U.S.-Mexico border wall, state Attorney General Xavier Becerra said on Sunday. "Definitely and imminently," Becerra told ABC's "This Week" program when asked whether and when California would sue the Trump administration in federal court. Other states controlled by Democrats are expected to join the effort. "We are prepared, we knew something like this might happen. And with our sister state partners, we are ready to go," he said.

A group of former national security officials is set to release a statement arguing that there is no justification for Trump to use a national emergency declaration to fund a wall along the U.S.-Mexico border.

The Senate gave final approval Thursday morning to a House-passed resolution to end the state of emergency declared by President Trump in order to steer billions of additional tax dollars to his pet project, a bigger, more extensive wall along the U.S.-Mexico border. It's the second rebuke to Trump in two days -- the body voted Wednesday to cut off U.S. aid to Saudi Arabia for the war against Yemeni rebels. But there does not appear to be enough GOP support for the wall resolution to overcome a certain Trump veto. That's because of members like Sen. James Lankford (R-Okla.), who either do not recognize the principle at stake or do not care about it. The resolution passed, 59-41, with 12 Republicans joining all the chamber's Democrats and independents in support.

The Senate was a familiar holding pattern Thursday afternoon: waiting to hear whether President Trump would sign Congress' compromise spending deal, which appropriated not nearly the amount of money he wants to build his "border wall," before voting on it. Trump, despite hinting throughout the week that he would sign the bill and supplement its border security provisions with a smattering of additional funds later, had begun to waffle. Republican senators were literally praying Thursday for Trump sign it and avoid another calamitous government shutdown. Around 3 p.m., Senate Majority Leader Mitch McConnell came to the Senate floor to provide an update. "[Trump] has indicated he is prepared to sign the bill," McConnell said.