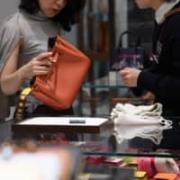 BEIJING – China is stockpiling U.S. computer chips, a sign that tech companies there are preparing for worsening trade relations that could lead to being cut off from American technology. Chinese imports of American semiconductors, integrated circuits and the equipment to make them have risen strongly in the past three years, analysis of the latest official data shows, despite overall purchases from the U.S. declining dramatically since 2018 amid the trade war. Imports of chips and related machinery from the U.S. were worth almost $1.7 billion in August, the most since at least the start of 2017, and were close to that again in October. As U.S. President Donald Trump's tariff war with China morphs into a more general confrontation over future technology, the risk of a "silicon curtain" descending is real for many Chinese firms that are not yet able to source high-tech components domestically. "It's politically intolerable to China that the U.S. has an at-will ability to turn off major companies like ZTE and Fujian Jinhua, as well as being able to deal major operational blows to Huawei," said Dan Wang, a technology analyst at Gavekal Dragonomics in Beijing. 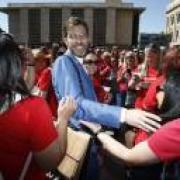 BEIJING – Chinese and U.S. officials met face-to-face Thursday in an attempt to resolve a dispute over technology that has taken the world's two largest economies the closest they've ever come to a trade war. A high-powered U.S. delegation arrived in Beijing for talks with Chinese officials aimed at defusing the tensions, though analysts say they appear unlikely to yield a breakthrough given the two sides' intensifying rivalry in strategic technologies, where China lags behind the U.S. U.S. Treasury Secretary Steven Mnuchin is leading the group, which includes Commerce Secretary Wilbur Ross and U.S. Trade Representative Robert Lighthizer. Liu He, President Xi Jinping's top economic adviser, headed the Chinese side in the talks, which are expected to end Friday. The dispute has deepened as China has stepped up efforts to overtake Western industry leaders in advanced technologies, especially for semiconductors, the silicon brains required to run smartphones, connected cars, cloud computing and artificial intelligence. Under Xi, a program known as "Made in China 2025" aims to make China a tech superpower by advancing development of industries that in addition to semiconductors includes artificial intelligence, pharmaceuticals and electric vehicles.

With money and waste, China fights for chip independence

Liu Fengfeng had more than a decade under his belt at one of the world's most prominent technology companies before he realized where the real gold rush in China was taking place. Computer chips are the brains and souls of all the electronics the country's factories crank out. Yet they are mostly designed and produced overseas. China's government is lavishing money on anyone who can help change that. So last year Liu, 40, left his job at Foxconn, the Taiwanese giant that assembles iPhones in China for Apple. 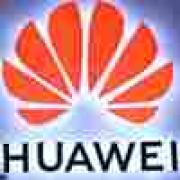 WUHAN, China -- In 2019, the U.S. sanctioned two major Chinese telecom firms, temporarily cutting them off from a vital supply of semiconductor chips -- bits of silicon wafer and microscopic circuitry that help run nearly all our electronic devices. Wuhan Hongxin Semiconductor Manufacturing Co. promised a way out, toward self-reliance in the face of increasingly tough U.S. curbs on this technology. The private company once boasted on its website that it would raise a total of $20 billion to churn out 60,000 leading-edge chips a year. None of that would come to pass. Hongxin's unfinished plant in the port city of Wuhan now stands abandoned.

The Latest U.S. Blow To China's Huawei Could Knock Out Its Global 5G Plans 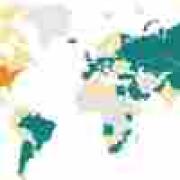