Parents told to destroy baby doll because of spying fears

An official German watchdog has told parents to destroy an internet-connected doll because hackers can use it to spy on children. My Friend Cayla was found to be equipped with an insecure Bluetooth device, which cybercriminals could hijack, in order to steal personal data and listen and talk to the child playing with it. Germany's Federal Network Agency, the regulatory office for electricity, gas, telecommunications, post and railway markets, has now warned parents to destroy it. The giant human-like robot bears a striking resemblance to the military robots starring in the movie'Avatar' and is claimed as a world first by its creators from a South Korean robotic company Waseda University's saxophonist robot WAS-5, developed by professor Atsuo Takanishi and Kaptain Rock playing one string light saber guitar perform jam session A man looks at an exhibit entitled'Mimus' a giant industrial robot which has been reprogrammed to interact with humans during a photocall at the new Design Museum in South Kensington, London Electrification Guru Dr. Wolfgang Ziebart talks about the electric Jaguar I-PACE concept SUV before it was unveiled before the Los Angeles Auto Show in Los Angeles, California, U.S The Jaguar I-PACE Concept car is the start of a new era for Jaguar. Japan's On-Art Corp's CEO Kazuya Kanemaru poses with his company's eight metre tall dinosaur-shaped mechanical suit robot'TRX03' and other robots during a demonstration in Tokyo, Japan Japan's On-Art Corp's eight metre tall dinosaur-shaped mechanical suit robot'TRX03' performs during its unveiling in Tokyo, Japan Singulato Motors co-founder and CEO Shen Haiyin poses in his company's concept car Tigercar P0 at a workshop in Beijing, China A picture shows Singulato Motors' concept car Tigercar P0 at a workshop in Beijing, China Connected company president Shigeki Tomoyama addresses a press briefing as he elaborates on Toyota's "connected strategy" in Tokyo.

WhatsApp has temporarily suspended giving parent company Facebook information about users in Europe for ad targeting, responding to concerns there over privacy, a source close to the matter said Tuesday. Conversations with officials in Europe over the past few months resulted in the social network deciding to only tapping into WhatsApp user data there for purposes such as fighting spam, according to the source. The break was described as an effort to give regulators time to share privacy concerns and for Facebook to consider ways to address them. German data protection authorities in September cited privacy concerns when they blocked Facebook from collecting subscriber data from WhatsApp there. "It has to be (the users') decision whether they want to connect their account with Facebook," Hamburg's Commissioner for Data Protection and Freedom of Information Johannes Caspar said at the time.

It's hard to let go of loved ones, especially when they pass away suddenly. But thanks to rapidly evolving artificial intelligence, you soon may not have to let go. Case in point, Eugenia Kuyda, the co-founder and CEO of a Russian artificial intelligence startup called Luka Inc, who recently brought her best friend back to life as an AI chatbot. Kuyda lost her best friend, fellow tech entrepreneur Roman Mazurenko, in November 2015, but just three months after his tragic car accident, she sent the first text message to his AI personality, Roman. With no grave to visit, because he had been cremated, the young programmer, decided to use every digital memory of him, including photos, news articles and thousands of SMS text messages he had sent to her over the years, and feed them into a neural network to create an AI chatbot that many of those who knew Roman say sounds just like him.

Apple plans to introduce a much smarter version of Siri this year, leveraging a bunch of machine learning technologies it recently acquired with Turi, Tuplejump, Perceptio, VocalIQ and other AI-focused acquisitions, Digitimes claims. The report seems to suggest Apple plans to introduce these features alongside introduction of a future iPhone, though it is not clear if this will be this year, or the next. However, this makes little sense given Siri is now available across all Apple's platforms – while the capabilities may differ (Siri behaves a little differently on a Mac, for example), the basic tech is similar. That's why I can't imagine new Siri features being introduced as an iPhone exclusive. The report also states other smartphone vendors, "are likely to introduce models featuring AI (artificial intelligence) applications as a means to ramp up market shares in 2017, according to industry sources." 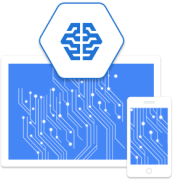 Google had an announcement that means strictly business for its push to be known as a leader in cloud services. "Today [Wednesday], "we've taken a major stride forward with the announcement of a new product family: Cloud Machine Learning." The move is all about taking Cloud Machine Learning mainstream, "giving data scientists and developers a way to build a new class of intelligent applications," according to a post from Fausto Ibarra, director, product management, Google Cloud Platform. Blair Hanley Frank of IDG News Service said in so doing, that "Google is making it easier for businesses to take advantage of the machine learning revolution with a new product for building models that predict the future." Cade Metz in Wired said "the company unveiled a new family of cloud computing services that allow any developer or business to use the machine learning technologies that power some of Google's most powerful services."