The new commander of Russian forces in Ukraine has said the situation in the Kherson region has become "very difficult" as Ukrainian forces push ahead with an offensive to take back southern and eastern areas of the country, and that Moscow was preparing to evacuate civilians weeks after annexing the area. Sergei Surovikin, a Russian air force general appointed on October 10 to lead the invasion, said the situation in Kherson was "very difficult" for both civilians and Russian soldiers. "The Russian army will above all ensure the safe evacuation of the population" of Kherson, Surovikin told state television Rossiya 24. "The enemy is not abandoning its attempts to attack Russian troop positions," he added. Russian forces in the region have been driven back by between 20 and 30 kilometres (13-20 miles) in the last few weeks and are at risk of being pinned against the western bank of the 2,200-kilometre-long (1,367-mile-long) Dnieper river that bisects Ukraine.

Russia began evacuating civilians from Kherson in southern Ukraine on Wednesday in the face of advances by Kyiv, which said the population transfers amounted to "deportations". As battlefield developments continued to stretch Russia, President Vladimir Putin on Wednesday imposed sweeping new security measures in a swathe of Russian regions and declared martial law in four areas of Ukraine recently annexed by Moscow. Moscow continued to rain down missiles and munitions on all corners of Ukraine, including Kyiv and the country's west, which was spared the brunt of the Russian onslaught earlier in the conflict. Ukraine said it had downed "several Russian rockets" over Kyiv in the third consecutive day of attacks on the capital. A Ukrainian representative in the Kherson region called the push by Russia to evacuate the city of the same name the "equivalent of deportation". 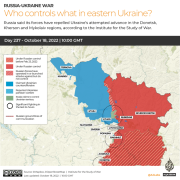 Ukraine has warned of an emerging "critical" risk to its power grid after President Volodymyr Zelenskyy said that repeated Russian bombardments had destroyed one-third of the country's power facilities as winter approaches. The warning on Tuesday came as Russian forces claimed to have retaken territory from Ukrainian troops in the eastern Kharkiv region, Moscow's first announced capture of a village there since being nearly entirely pushed out of the region last month. At the same time, Russian attacks rocked energy facilities in Kyiv and urban centres across the country, causing blackouts and disrupting water supplies, one day after the capital was bombarded with a swarm of suicide drones. "The situation is critical now across the country. It's necessary for the whole country to prepare for electricity, water and heating outages," Kyrylo Tymoshenko, the deputy head of the Ukrainian president's office, told Ukrainian television. 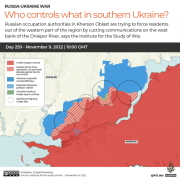 Russian Defence Minister Sergei Shoigu has ordered his troops to withdraw from the west bank of the Dnieper River in the face of Ukrainian attacks near the southern city of Kherson, a significant retreat and potential turning point in the war. Prior to the Wednesday order, Kyiv's forces had made significant advances in recent weeks through Kherson province or oblast, the gateway to the Crimea Peninsula that Russia annexed in 2014. February 24: Russian armoured vehicles cross from Crimea into Kherson province as Moscow's forces pound Ukrainian cities and towns on the first day of Russian President Vladimir Putin's "special military operation". March 2: Russia's defence ministry says the city of Kherson is under full Russian control. Russian troops are seen patrolling streets in the city centre. 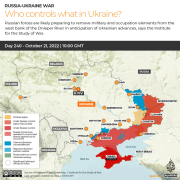 Russian-installed authorities in occupied Kherson have urged residents to leave "immediately" as they expect Ukrainian troops to wage a counteroffensive campaign to reclaim the city in southern Ukraine. The regional administration posted a message on the Telegram app on Saturday demanding civilians leave Kherson city, citing a tense situation on the front and the threat of shelling and alleged plans for "terror attacks" by Ukrainian forces. They urged civilians to use boat crossings over a river to move deeper into Russian-held territory. Russia captured the regional capital city of Kherson in the early days of the war and occupied other parts of the region in the months following. Kherson is one of four regions President Vladimir Putin illegally annexed last month.