That SpaceX explosion blew up one of Facebook's most ambitious projects

SpaceX is reeling after an early-morning explosion took out its rocket on the launchpad at Cape Canaveral. The incident is a major setback for chief executive Elon Musk. But odds are the tragic news is disappointing another U.S. tech billionaire, too. You see, the rocket destroyed Thursday was bearing a satellite that Facebook intended to use to beam Internet access to developing nations. When the rocket went up in smoke, so did the cargo inside, according to SpaceX.

A SpaceX Falcon 9 rocket exploded during a static fire test at Cape Canaveral Air Force Station on Thursday, Sept. 1, 2016. The SpaceX explosion that destroyed a satellite that was to deliver Internet access to sub-Saharan Africa has delivered a major setback to Facebook CEO Mark Zuckerberg's efforts to connect billions of people to the Internet. SAN FRANCISCO -- The fiery explosion of the SpaceX rocket at Cape Canaveral this week reverberated in Silicon Valley and Africa, where Facebook CEO Mark Zuckerberg was promoting the Internet connectivity the satellite on board aimed to deliver. The loss -- Facebook had leased some of the satellite's capacity -- will delay the rollout of a key component of Facebook's ambitious plan to connect every person on the planet to the Internet. "As I'm here in Africa, I'm deeply disappointed to hear that SpaceX's launch failure destroyed our satellite that would have provided connectivity to so many entrepreneurs and everyone else across the continent," Zuckerberg wrote during his Africa visit that was timed to coincide with the satellite's launch.

What the SpaceX Explosion Means for Elon Musk and Mark Zuckerberg

It's a common refrain among the orbitally inclined. The billionaire Richard Branson said it when Virgin Galactic's SpaceShipTwo crashed in the Mojave Desert in the fall of 2014, killing one test pilot and seriously injuring another. The astronaut Scott Kelly said it last June, when a SpaceX rocket carrying supplies to him and his colleagues aboard the International Space Station disintegrated in midflight. Charles Bolden, the administrator of NASA, said it this April, in a speech about the challenges of space exploration in the twenty-first century. On Thursday, the moment was right to spit-polish the adage and trot it out once again.

Sentinel satellites to monitor every volcano

A UK-led team of scientists is rolling out a project to monitor every land volcano on Earth from space. Two satellites will routinely map the planet's surface, looking for signs that might hint at a future eruption. They will watch for changes in the shape of the ground below them, enabling scientists to issue an early alert if a volcano appears restless. Some 1,500 volcanoes worldwide are thought to be potentially active, but only a few dozen are heavily monitored. One of these is Mount Etna where, last month, a BBC crew was caught up in a volcanic blast while filming a report on the new satellite project.

How the Strongest Solar Flare in a Decade Is Affecting Earth 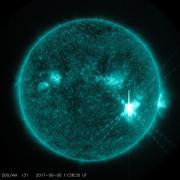 Early Wednesday morning, the sun unleashed two monster solar flares, the second of which was the most powerful we've seen in more than a decade. The burst of radiation was so intense, it caused high-frequency radio blackouts across the daytime side of Earth that lasted for about an hour. Solar flares are giant explosions on the surface of the sun that occur when twisted magnetic field lines suddenly snap and release massive amounts of energy. How can a telescope orbiting Earth detect light emitted from the far side of the sun? NASA scientists tried to figure out the answer after the Fermi Gamma-Ray Space Telescope recorded gamma rays, the highest-energy form of light, originating from solar flares on the far side of the sun on three separate occasions.