The federal government has announced the next phase of its airport automation plan, with international travellers departing Australia now able to check-in via smartphone. The initiative, available from Monday, will see airlines issue electronic boarding passes for international flights. Travellers using the digital option won't need to visit the check-in desk to show their passport, and they will be able to show their boarding pass on a mobile device instead of using a paper boarding pass, still following the normal border clearance path at the airport. "Last financial year more than 21.4 million travellers were cleared through the border departing Australian international airports. This number will continue to rise," Minister for Citizenship and Multicultural Affairs Alan Tudge said in a statement.

Passengers trying to enter or leave Australia on Monday morning have been delayed following an IT outage experienced by the Australian Border Force (ABF). The outage is affecting Sydney, Melbourne, and Brisbane international airports. A spokesperson for the ABF told ZDNet the government entity is working to resolve the issue that is creating delays in processing both inbound and outbound passengers. "The Australian Border Force is working with the Department of Home Affairs to resolve an IT systems outage impacting inbound and outbound passenger processing at international airports," the spokesperson said. "Additional ABF staff have been deployed to process passengers and to minimise delays."

The Australian government has introduced a pair of Bills into the House of Representatives on Wednesday that would allow for the creation of a system to match photos against identities of citizens stored in various federal and state agencies. 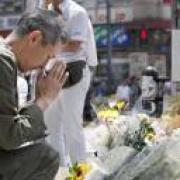 A year ago, when Apple rolled out the iPhone X, one of their most touted features was facial ID. You no longer needed to press a home button or use a passcode. You could unlock your phone with your face. It was the first time I'd really seen facial recognition software being practically used. You probably use something every day with facial recognition software even if you don't realize it--I'm looking at you Snapchat and Instagram face filters.