Fascinating images captured by a telescope reveal a mile-wide asteroid

Nasa's spacecraft made to deflect asteroids has entered final stages

Nasa's plans to launch a spacecraft capable of crashing into an asteroid to knock it off its collision course with Earth has now entered the final stages. The space agency is set to fire its Double Asteroid Redirection Test (DART) system, which could one-day be called upon to save the planet, into space by 2020. DART is set to target the binary asteroid Didymos to test the system, following approval from Nasa late last month. Although the egg-shaped target, also known as'Didymoon', is only 160 metres (525ft) across, the test will highlight whether the technique cold be used to deflect a much larger asteroid that threatens to wipe out human civilisation. The joint US-European Aida (Asteroid Deflection & Assessment) mission will crash a probe into the smaller of a pair of binary asteroids to see if the object's path can be altered The DART system is being designed, built and managed by the Johns Hopkins Applied Physics Laboratory (APL) in Laurel, Maryland.

Asteroid Passes By Our Planet Six Times Closer Than The Moon 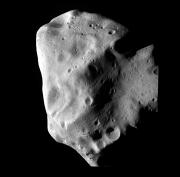 An asteroid the size of a truck zoomed past Earth six times closer than the moon, according to a CNET report. The object, about 15 to 32.8 feet in length, the made the closest pass-by Earth than any other asteroid since last September. Asteroids passing near our planet are tricky to spot, especially the smaller ones. That's what happened with this asteroid, 2017 BH30, discovered Sunday by the University of Arizona's Catalina Sky Survey just hours before passing by Earth at a strikingly-close distance -- about 40,000 miles away. The asteroid was almost as close as satellites in geosynchronous orbit, which help with weather monitoring and forecasting.

We've spotted a strange asteroid that's spinning itself to pieces

A small asteroid has been throwing off rocks for at least 6 years, the most activity we've ever seen from a rock of its type.