Why Python Is Preferred In Machine Learning? Amar Infotech 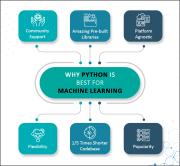 Python is acknowledged collectively as one of the best languages for AI and ml projects. I believe what makes Python web development thus popular is- "it's super easiness" & "it's straightforward coding". Nobody likes to write tough and confusing codes for algorithms that require mathematical calculation. Hence, many businesses widely consider Python as a great alternative for data science and scientific computing and hire python developers for building complex scientific & numeric applications. Python developer's area unit focused on serving a friendly system to its clients.

Why Is Python An Ideal Choice For AI & Machine Learning?

We have come quite far in terms of technology. Looking at the timeline of history, it's not quite long when we came up with the idea of wheels. Soon the human curiosity led to the development of science and technology which further led the development of several technological marvels. These advancements have aided the growth of human civilization. The discovery of any new technology has immense impact on civilization, so much so that it defines the era of discovery.

Has it ever happened to you that you try to achieve something but the end result was totally unanticipated? Sometimes good things are an accident – Electricity, Discovery of America, Gravity, and PHP. Actually, PHP was never intentionally designed. Rasmus Lerdorf, a Danish software engineer attempted to design an easy common gateway interface by using the C language that would help him track views on his CV. Little did he know what he had created for such a menial task is going to change the face of web applications. As for Python, the language has its own fan following spread worldwide.

7 Kinds of Applications That Can be Developed Using Python

For decades now, technology has been going through makeovers, changing and improving a little every day. And as a result, we have SmartPhones, Supercomputers, Artificial Intelligence, a lot of amazingness like such. Now, to utilize these technologies we now have developed different programs and mobile applications, which, by the way, are created by programming languages. One such popular language is Python. Python is a very popular programming language among developers. In fact, it was declared the top programming language for 2019 beating even the original coding language – Java.