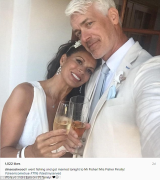 Clint Eastwood's ex-wife Dina Eastwood has wed basketball coach Scott Fisher. Their wedding comes after a peculiar case of'wife swapping,' as Scott's ex-wife Erica Tomlinson-Fisher also dated actor-director Clint, now 86, after the couples broke up in 2012. Dina, 50, and Scott, 52, tied the knot at Bacara Resort & Spa in Santa Barbara, California on Friday. And the happy bride shared some wedding photos on Instagram. 'I went fishing and got married tonight to Mr Fisher!

TIPPING OFF: Coach K not worried about 0-4 record out West

Now that we've caught our collective breath after the upsets and dramatic finishes of the first two rounds of the NCAA Tournament, it's time to move on to the Sweet 16. Duke plays top-seeded Oregon in Anaheim, California, at 6:55 p.m. Pacific time. History says playing three time zones away doesn't bode well for the Blue Devils. Duke is 0-4 all-time in NCAA Tournament games played on the West Coast. Coach Mike Krzyzewski doesn't put much stock in the statistic.

There were times when Clippers Coach Doc Rivers peered at his bench last season and probably wished he was seeing things. A few productive players besides Jamal Crawford would have been nice. The Clippers reserves ranked 22nd in the NBA in scoring (30.4 points per game) and were 29th in efficiency, an advanced metric that encompasses nearly every meaningful statistic. Of the 16 playoff teams, the Clippers had a bench that was last in efficiency, forcing their starters to log as many minutes as their legs could withstand without buckling. Crawford has provided his usual scoring punch and could win a record third sixth-man-of-the-year award.

The Lakers flail clumsily for 48 minutes, fumble around and lose, a pattern continually repeating itself in Kobe Bryant's final season. They trailed the Clippers by 18 points in the first quarter Tuesday, losing a 10th consecutive time to the team Bryant used to pound with ease. "Oh, no sadness my way," Clippers Coach Doc Rivers said before the Clippers' 103-81 victory. "I love Kobe but I'd never cheer for him to win." "It would be nice if he was in the playoffs and competing -- as long as we could still win -- but it would be nice for him because he's been such a champion," Rivers said. "Really, the only thing that's strange is that he's just been so competitive as a person.

UCLA Coach Jim Mora specified the issue that has sidelined quarterback Josh Rosen, explaining Monday for the first time that the quarterback's return is contingent upon a nerve in his right shoulder beginning to fire again. Rosen has not played since the final minutes of the Bruins' loss to Arizona State on Oct. 8, sitting out games against Washington State and Utah. It was apparent that Rosen had suffered injuries to his lower body and throwing shoulder against the Sun Devils, but Mora said he did not want to provide details until the shoulder injury was mentioned on the game broadcast Saturday. "As a head coach, when one of our players has an injury, I'm not going to tell people what it is unless it's very, very obvious because I don't want the opponent to target it because I know that's what they do," Mora said. "As a coach, if you see an opponent and you know part of his body is hurt a little bit, it's a vicious, violent game, but you go after it."