VW knows it has to rethink its approach to technology if it's going to adapt to a world full of electric cars, autonomy and ridesharing services, and that extends to the very software that makes those vehicles tick. The automaker has committed €3.5 billion ($4.05 billion) through 2025 for a connected car push that not only moves the company toward a new role as a "mobility services provider," but will include the development of an in-house operating system, vw.OS, that will govern entire vehicles. Where conventional cars from VW and other brands frequently have dozens of separate control systems each with their own vendor-specific software, vw.OS would boil things down to just a few systems running on one common platform. This not only promises to greatly streamline self-driving technology, but promises "continuous updates and upgrades." If it sounds familiar, it should -- Tesla already uses a custom platform to both add features and change the performance of its cars.

LG Electronics said on Thursday that it has recorded 18.8 trillion won in sales and 1.52 trillion won in operating income in the first quarter of 2021. It is a surge of 28% and 39%, respectively, from the same time period a year ago. Sales and operating income were the South Korean electronics maker's highest quarterly results to date. The stellar performance was backed by double digit growth in its home appliances and TV businesses, LG said, which recorded nearly 920 billion won and 403.8 billion won, respectively, in operating income. Demand for its premium appliances increased globally, while the uptake for its high-end TV brands such as OLED and NanoCell in North America and Europe recovered compared to a year ago.

British Airways plans to add extra seats into each economy class row on some aircraft. The plan could increase the number of seats on its Boeing 777 aircraft by almost 20%, from 280 to 332. Each row would have 10 seats rather than the current nine. BA said: "We are flying more customers than ever before... To meet this demand, we are updating our (Boeing) 777 cabins to bring us into line with many of our competitors." It said it would also be upgrading its in-flight entertainment systems with bigger screens. 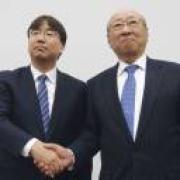 Sony Corp. said Friday it set a record for group operating profit for the first time in 20 years in fiscal 2017, posting a ¥734.86 billion ($6.7 billion) figure -- up 154.5 percent from the previous year -- on the back of strong smartphone semiconductor sales. The figure exceeds the electronics giant's highest all-time operating profit of ¥525.72 billion recorded in fiscal 1997. Its semiconductor business, which makes image sensors for cameras used in smartphones including Apple Inc.'s iPhones, logged an operating profit of ¥164 billion, reversing its ¥7.8 billion loss from the previous year. The music and game businesses also contributed. In addition, Sony set a new group net profit record for the first time in 10 years, booking ¥490.79 billion for the business year ended March 31 -- a more than five-fold increase from the previous year.