Rate of global sea level rise increased by 50% since 1990

PARIS – Greenland and Antarctica are shedding six times more ice than during the 1990s, driving a higher sea level that could bring annual flooding by 2100 in regions that now are home to 400 million people, scientists have warned. Last summer's Arctic heat wave will likely top the 2011 record for polar ice sheet loss of 552 billion tons, they reported in a pair of studies, published Wednesday in Nature. That is roughly the equivalent of eight Olympic pools draining into the ocean every second. While less visible than climate-enhanced hurricanes, rising seas may ultimately prove the most devastating of global warming impacts. Indeed, it is the added centimeters -- perhaps meters by the 22nd century -- that make storm surges from climate-enhanced tropical cyclones so much more deadly and destructive, experts say. 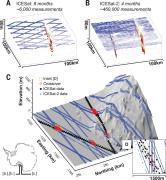 Earth's ice sheets are melting and sea levels are rising, so it behooves us to understand better which climate processes are responsible for how much of the mass loss. Smith et al. estimated grounded and floating ice mass change for the Greenland and Antarctic ice sheets from 2003 to 2019 using satellite laser altimetry data from NASA's ICESat and ICESat-2 satellites. Quantifying changes in Earth's ice sheets and identifying the climate drivers are central to improving sea level projections. We provide unified estimates of grounded and floating ice mass change from 2003 to 2019 using NASA's Ice, Cloud and land Elevation Satellite (ICESat) and ICESat-2 satellite laser altimetry. Observations of ice sheet mass change are essential to our understanding of present and future sea level change (1–3).

Coastal cities across the world are at a high risk of flooding by the end of the century, according to the results of a shocking new study.