An inflatable habitat is set to go into space this evening, atop a private SpaceX rocket contracted by Nasa. The inflatable room will attach to the International Space Station (ISS) for a two-year test and become the first such habitat to hold humans in orbit. It was built by Nevada company Bigelow Aerospace and is intended to pave the way towards inflatable habitats for long space trips, including to Mars. Its launch is the first Nasa cargo run for SpaceX since its June 2015 mishap. The US space agency has scheduled lift-off for 16:43 local time (21:43 BST) from Cape Canaveral Air Force Station in Florida.

Inflatable space stations could orbit the Earth by 2020

In order to fit inside an Atlas V rocket, a B330 will be folded when it takes off from Earth. Even then, the Atlas V is the only rocket with a big enough payload compartment to accommodate one. That likely played a huge part in Bigelow's decision to strike a deal with ULA. Besides expanding the ISS, several B330s can be linked together to form an independent space station, as well. The companies can then rent them out to private corporations and institutions that want to perform non-government scientific research in microgravity. 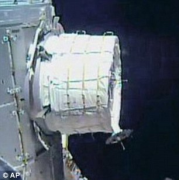 NASA successfully inflated a new experimental room aboard the International Space Station Saturday, in what could be the first step towards entire inflatable space stations. The Bigelow Expandable Activity Module, or BEAM, named for Bigelow Aerospace, the company that created it, could be a precursor to moon and Mars habitats, or even orbiting tourist hotels. But it will still need work: the BEAM failed to inflate on its first attempt Thursday, and took three days in total to inflate to its full dimensions of 13 feet in length and ten-and-a-half feet in diameter. Slow going: It took three days to fully inflate the Bigelow Expandable Activity Module, or BEAM, from its initial cylindrical shape (left) to a more expansive form. Expanding: An attempt to pump it up Thursday was foiled by friction keeping the folding tiles together.

SpaceX Loads Inflatable Habitat For Launch To The Space Station

The habitat is scheduled to launch on April 8 for the International Space Station, where it will be attached and inflated, and remain in place for two years. Putting balloons in outer space may not seem like the best idea on the surface, but it's exactly what's about to happen. On April 8, SpaceX is scheduled to launch its uncrewed Dragon cargo capsule to the International Space Station, and among the various supplies in tow will be an inflatable space habitat called the BEAM designed by Bigelow Aerospace. Once up in orbit, the BEAM habitat will be attached to the space station and inflated with oxygen and expand from its 8-feet wide packed form into a new room with 565 cubic feet of volume. The idea is to be able to send structures like this up that take up less space during the flight, but which can expand to a useful size when in orbit, saving costs.