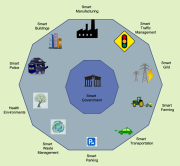 According to techopedia, a smart city is a city that utilizes information and communication technologies so that it enhances the quality and performance of urban services (such as energy and transportation) so that there's a reduction in resource consumption, wastage, and overall costs. In this article, we will look at components of a smart city and its AI-powered- IoT use cases, how AI helps with the adaption of IoT in Smart cities, and an example of AI-powered-IoT solution. Hence, a smart city would be a city that not only possesses ICT but also employs technology in a way that positively impacts the inhabitants. This article is an excerpt taken from the book'Hands-On Artificial Intelligence for IoT' written by Amita Kapoor. The book explores building smarter systems by combining artificial intelligence and the Internet of Things--two of the most talked about topics today.

The world is quickly becoming urbanized. According to the United Nations, 68 percent of the global population will live in cities by 2050. While cities hold most of the world's wealth, they also produce 70 percent of CO2 emissions and consume two-thirds of energy worldwide. As more people move into cities, their sustainability comes into question. To improve urban living and to optimize their resources, cities are folding internet-connected devices into streetlights, municipal infrastructure, parking meters, and more, composing what could be called the "technological" portion of a smart city. In around 30 years, planet Earth will be home to almost ten billion people, 68 per cent of which will live in urban areas. And those urban areas will face a torrent of problems, as authorities will have to rely on limited resources to provide public services to a growing number of citizens. Besides traffic congestion and the potential rise in crime rates, rapid urbanization could also lead to a number of environmental problems like air pollution and overwhelmed waste collection systems. To tackle these challenges and make cities more liveable and manageable, governments are increasingly turning to the smart city concept. At the heart of this approach is the use of technology to improve public services such as transportation, water systems, waste disposal, and many others.

According to the data published by the UN, the world population will reach up to a limit of 9.7 billion by the end of 2050. It is deduced that almost 70% of that population will be an urban population with many cities accommodating over 10m inhabitants. As the number grows, we'll have to encounter challenges regarding making a provision for resources and energy to all of the inhabitants and at the same time, avoiding environment deterioration. Another critical challenge is administration and management to prevent sanitation issues, mitigate traffic congestion, thwart crime, etc. But many of these problems can be tamed by the use of AI-enabled IoT.

How IoT, drones and automation can improve occupancy services

Automated solutions are poised to dominate smart building technology growth on a global scale. A smart building is comprised of a number of systems and sensors that include automated infrastructure management systems, security monitoring and sensors, and in-building wireless systems. As urban planners and facilities managers work to meet the demands of an increasing population, they are exploring new ways to improve the experiences of building occupants and visitors. As smart buildings become more pervasive, we are starting to see an array of connected sensors and technologies coming together to help address the common challenges. By combining traditional and non-traditional equipment such as CCTV and drones with cognitive services like visual recognition, a host of user services and experiences are likely to improve dramatically.