Google Assistant has been available on recent Android phones for a while. However, that still puts it out out of reach of many Android users when a whopping 46.5 percent of active Android users are running a version older than Marshmallow. To help address this, Google is making Assistant available on devices running Android Lollipop. If you're still rocking an older phone, you'll get the same AI helper as a shiny new handset. 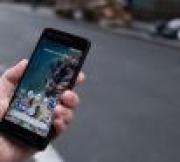 The news has always played an essential role in our lives, keeping us informed about the world and the issues we care about. But the fact is, while there is a sea bad news, there is also a plethora of "good news" happening where people are making progress solving real issues. The Google Assistant is now making this kind of news easier to find. "Tell me something good" is a new experimental feature for Assistant users in the US that delivers your daily dose of good news. Just say "Hey Google, tell me something good" to receive a brief news summary about people who are solving problems for our communities and our world, the company said in a blog post.

It has been over two years since the existence of the Ghost Push mobile Trojan has been made public -- but millions of devices are still vulnerable. The Trojan, which began evolving in the wild in 2014, has been known to infect up to 600,000 Android smartphone and tablet users per day at its peak. According to Trend Micro researchers, the malware runs a malicious DEX file after installation, an Android program executable, to root victim devices and run malicious processes on startup. Ghost Push is also able to install unwanted apps and programs, display adverts, spy on users and steal personal information. The Trojan also pushes ads in the Android notification bar to trick users into paying for additional "services," such as porn or other third-party software.

OnePlus has just released the OxygenOS 3.1.0 The OnePlus X has been stuck on Android Lollipop for almost a year, but with the release of the latest OxygenOS build for the handset, it will finally be upgraded to Android Marshmallow soon. The over-the-air (OTA) update is still a community build, meaning that it will most likely still be buggy and unstable, as pointed out by 9To5Google. OnePlus notes that this build comes with mobile network stability issues in some regions and some third-party apps may not yet be compatible with the software. The company also stated that it may disable the download link once it receives enough feedback.