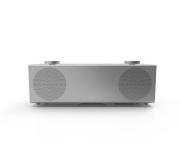 Samsung today pulled the covers off of a new wireless speaker that it will formally introduce at the CES conference in Las Vegas next week. The H7 speaker features Samsung's previously announced Ultra High Quality (UHQ) audio and is capable of going down to 35Hz to deliver low bass, according to a statement. Wheels on the top of the gadget will let people adjust the volume and choose playlists from music streaming services. But what's notable is that the speaker doesn't have any smart intelligent assistant built in. Between the Amazon Echo and the Google Home, that sort of thing is in if anything is.

It might be time for Samsung to dump Bixby

Samsung has a big problem. No, it's not just the Galaxy Note 9 is an incremental update. Or that the Galaxy Watch is no Apple Watch. Or that we barely know anything about the Galaxy Home smart speaker. At its summer Unpacked event, Samsung made it clear injecting AI into its products is a key way of differentiating its products from the competition.

Samsung is spilling the beans on more than just its smartwatch plans in the wake of its Galaxy Note 8 event. In an interview with CNBC, mobile division chief DJ Koh has confirmed that his company is working on a smart speaker. He's shy on details, as is usually the case with teases like this, but he hints that Samsung might announce it "soon." That doesn't necessarily mean a debut at next week's IFA show, but it's not some distant prospect. The earlier rumor didn't shed much more light on the speaker, but it's expected to revolve around the Bixby voice assistant (not that it was likely to use anything else).

Bixby 2.0 Is Likely To Be A Reason Not To Buy The Galaxy Note 9

NEW YORK, NY - MARCH 29: Sriram Thodla, senior director of services and new business at Samsung, speaks about the new voice agent named'Bixby' that is featured on the new Samsung Galaxy S8 during a launch event, March 29, 2017 in New York City. Following the recall and discontinuation of the Samsung Galaxy Note 7, the Galaxy S8 is the new flagship smartphone for Samsung. While all eyes will be on the Galaxy Note 9 at Samsung's next launch event, Bixby 2.0 is likely to debut in a smart speaker which may actually damage its sales potential. Bixby is Samsung's attempt to compete against Google Assistant and Amazon Alexa and so far, it has been nothing short of a disaster. This is because compared to Google Assistant, Amazon Alexa and even the much-maligned Siri, Bixby is hopelessly outclassed.

Google set to dominate Apple, Amazon and Samsung in the race for the best voice assistant

The concept of virtual assistance has been in consumers' mind for more than half a century, first introduced through Sci-Fi movies such as 2001: A Space Odyssey (1968) featuring virtual assistant HAL and infamous quote "I'm sorry Dave, I'm afraid I can't do that." Portrayed as a must-have feature by the consumer tech industry, our research at Ovum shows that digital assistants, in fact, fall short of consumer expectations and can't do what they want. A survey conducted by Ovum in the UK and the US in May 2017 revealed that more than 50 percent of consumers don't find digital assistants useful (see Figure 1). The digital assistant population will equal today's human population in 2021. Instead, Google Assistant will dominate the native (i.e.