A Saudi-UAE-led coalition fighting Yemen's Houthi rebels has sent more than 10,000 additional troops towards the rebel-held port city of Hodeidah, according to Yemeni government officials. The deployment is part of a planned new offensive aimed at securing "areas liberated" from the Houthis, a military official told AFP news agency on Tuesday. According to the unnamed official, the mission is expected to commence "within days" and forces from Sudan, part of the coalition, had moved in to "secure" areas around the strategic city. For the past 10 days, Houthi rebels have stationed fighters on the rooftops of buildings in Hodeidah city, AFP reported government military officials as saying. The Yemen conflict began in 2014 when the Houthis toppled the government of President Abd-Rabbu Mansour Hadi and took control of the capital, Sanaa. 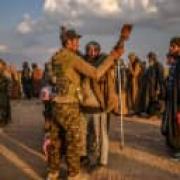 DUBAI - Iranian-aligned Houthi forces have agreed to draw back from two Yemeni ports on Monday while withdrawal from the main Hodeidah port will occur later alongside a retreat by coalition-backed forces massed outside the city, U.N. and Yemeni sources said. Houthi forces will withdraw 5 km (3 miles) from the ports of Saleef, used for grain, and Ras Isa, an oil terminal, as a first step agreed with the internationally recognized government, three sources said. The Houthi withdrawal from Hodeidah port and the pull-back by coalition forces 1 km away from the city's "Kilo 7" eastern suburb would take place as a second step, they said. An orderly troop withdrawal from Hodeidah, now a focus of an almost four-year war, is key to U.N.-led efforts to avert a full-scale assault on the port and pave the way for political negotiations. The conflict has killed tens of thousands of people and pushed Yemen to the brink of famine.

Yemen: Fighting flares near Hodeidah despite calls for peace

Thousands of Yemeni civilians are trapped on the southern outskirts of the Red Sea port of Hodeidah as forces backed by a Saudi-led coalition battle Houthi insurgents entrenched in the city, aid groups said. The alliance has massed thousands of Yemeni troops in recent days near the heavily defended port despite recent calls from international leaders for an end to the country's ongoing conflict, which has unleashed the world's "worst humanitarian crisis". Rebels and government officials reported intense battles on Monday near the western port city, according to AFP news agency. "All the people living between the airport and the university are trapped, the last four days have been very tough, it is beyond catastrophic levels," Isaac Ooko, Hodeidah area manager for the Norwegian Refugee Council, told Reuters news agency. "Air strikes have been very intense and the hovering of the jets causes permanent anxiety ... Hodeidah has become a ghost city, people stay indoors and the streets are deserted."

UN envoy Griffiths due to arrive in Yemen's Hodeidah

The UN special envoy to Yemen is expected to arrive in the Yemeni city of Hodeidah as part of his renewed push for peace, as sporadic fighting continued in the strategic port city. Martin Griffiths is spearheading the biggest push in two years to get the warring parties to join the upcoming peace negotiations aimed at ending almost four years of devastating conflict. Al Jazeera's Mohammed Adow, reporting for neighbouring Djibouti, said residents in Hodeidah say there is no meaningful ceasefire in place as there are still sporadic clashes near the city's outskirts. "When they announced that they were going to stop drone and ballistic missile attacks against their opponents, the Houthi fighters were categorical that they still have the right to defend their positions, which they have been fortifying in the past days," Adow said. The UN envoy arrived in the capital city of Sanaa on Wednesday, where he met the leaders of Iran-backed Houthi rebels, who have been in control of the Yemeni capital since 2014.

A spokesperson for the Houthi rebel movement in Yemen has threatened to launch missiles targeting the United Arab Emirates (UAE). In comments carried by Saba news agency, Brigadier General Sharaf Ghaleb Loqman said on Friday that "Abu Dhabi is no longer safe after today". Loqman also warned investors in Dubai and Abu Dhabi to take his remarks seriously. The statement comes amid reported advances by UAE-backed forces on the crucial port city of Hodeidah in western Yemen. The Houthi movement would effectively be under a land, sea and air blockade if they lose control of the Hodeidah, the country's third-largest city.