Many biologists use machine learning (ML) as a computational tool to analyze a massive amount of data, helping them to recognise potential new drugs. MIT researchers have now integrated a new feature into these types of machine learning algorithms, enhancing their prediction-making ability. Using this new tool allows computer models to account for uncertainty in the data they are testing, MIT researchers detected several promising components that target a protein required by the bacteria that cause tuberculosis (TB). Although computer scientists previously used this technique, they have not taken off in biology. "It could also prove useful in protein design and many other fields of biology," says the Simons Professor of Mathematics and head of the Computation and Biology group in MIT's Computer Science and Artificial Intelligence Laboratory (CSAIL) Bonnie Berger.

Machine learning is a computational tool used by many biologists to analyze huge amounts of data, helping them to identify potential new drugs. MIT researchers have now incorporated a new feature into these types of machine-learning algorithms, improving their prediction-making ability. Using this new approach, which allows computer models to account for uncertainty in the data they're analyzing, the MIT team identified several promising compounds that target a protein required by the bacteria that cause tuberculosis. This method, which has previously been used by computer scientists but has not taken off in biology, could also prove useful in protein design and many other fields of biology, says Bonnie Berger, the Simons Professor of Mathematics and head of the Computation and Biology group in MIT's Computer Science and Artificial Intelligence Laboratory (CSAIL). "This technique is part of a known subfield of machine learning, but people have not brought it to biology," Berger says.

Rick Wagner of ZebiAI and Patrick Riley of Google Accelerated Science (GAS) discuss the development and benefits of a new machine learning drug discovery platform. A collaborative study between ZebiAI, Google Accelerated Science (GAS) and X-Chem has used the power of machine learning to improve the drug discovery process. The paper, published in the Journal of Medicinal Chemistry, describes an effective machine learning platform with the ability to accelerate drug discovery based on DNA-encoded small molecule library (DEL) selection data. According to the researchers, their findings demonstrate the efficacy of the programme to predict highly potent small molecule inhibitors within a virtual library of compounds across three diverse protein targets. "We envision artificial intelligence (AI) and machine learning will be a leading source of novel, small molecule drug candidates. These technologies will become indispensable as a means for leveraging large datasets to understand disease biology and identify the best candidates to address intractable diseases," said Founder and Director of ZebiAI, Rick Wagner, when speaking to Drug Target Review.

Leveraging the Benefits of Artificial Intelligence Technology in Bioinformatics 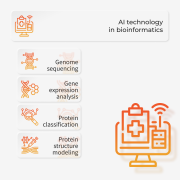 The use of artificial intelligence (AI) in bioinformatics has proved to be highly beneficial in managing and analyzing biological data. The merging of bioinformatics and AI analytics can be utilized for DNA sequencing, protein classification, and generative modeling for protein structure. Today, bioinformatics is defined as a field of hybrid science that uses computation to extract insights from biological data. But historically, it did not mean what it means today. The term was coined in the 1970s and referred to the study of informatics process in biotic systems.