Huawei has openly stated that it has plans on usurping Apple -- and eventually Samsung -- to become the world's biggest smartphone maker, and if its results for 2015 are anything to go by, then it is well on its way. Overall, Huawei saw profits rise 33 percent in the 12 months to the end of December with most of the growth coming in from its consumer division, with the Chinese company bucking the trend of slowing smartphone sales seen among the top manufacturers in the world. Huawei announced earlier this year that its smartphone sales had jumped 44 percent in 2015 with the company shipping over 108 million units. This growth contributed to a 73 percent increase in revenue in its consumer division as the company seeks to move away from its image as a budget smartphone maker and compete directly with Apple and Samsung. Typically seen as a China-centric company, Huawei revealed that 58 percent of its revenue now comes from overseas, with its smartphones alone being sold in 170 countries.

In 2014 and 2015 it launched the OnePlus One and OnePlus 2, devices it called "flagship killers" offering premium specs at a fraction of the cost of the iPhone or Samsung's Galaxy S range. From the start, the Chinese company pitched itself as a plucky underdog and cultivated mystique through an invite-only system to buy the phones, a velvet rope that tantalized techies here in the U.S. But despite the hype, OnePlus is still barely a blip on the radar of the big smartphone manufacturers. And the plucky upstart thing is a bit of marketing, too: OnePlus is actually a wholly owned subsidiary of Oppo, another Chinese smartphone maker which just entered the top five smartphone makers in the world. Oppo, in turn, is owned by the Chinese conglomerate BKK Electronics, a company that makes a wide range of products, including televisions and MP3 players some of which it sells in the U.S. under the Memorex brand.

Huawei has become one of the most recognizable consumer-tech brands in the world in a relatively short period of time. It's among several Chinese companies that reaped the rewards of an explosion in smartphone sales in its home nation, taking that momentum and branching out internationally. Still, Huawei's felt sort of like the New Balance of the smartphone world -- a tier-two brand that isn't quite as cool as Adidas (Samsung) or as desirable as Nike (Apple). But in 2018, something changed. This summer, Huawei supplanted Apple as the second biggest smartphone manufacturer in the world, behind Samsung -- a claim it's held on to as we moved into fall.

Huawei P9, P9 Plus arrive to take on the iPhone with dual-lens camera system

Huawei is gunning for the likes of Samsung with the P9 and P9 Plus smartphones. Huawei has unveiled its P9 and P9 Plus flagship smartphones, touting the handsets' dual-lens camera system as a key selling point. The metal-bodied P9 is a 5.3-inch device with 5.2-inch full HD screen, with 423PPI - more than the eye can identify, said Richard Yu, CEO of Huawei's consumer business group. Other screen specs include 96 percent colour saturation and 500nits brightness. The device runs EMUI, a version of Android Marshmallow, and has a 3000mAh battery -- which Huawei says is twice the capacity of the iPhone 6S.

This Android Phone Is the Perfect Samsung Note 7 Replacement 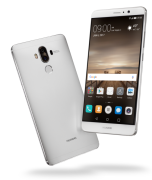 The good: Long battery life, Good camera with a wide range of controls, Easy to grip without a case The bad: Includes excessive apps, Not water and dust resistant, No virtual assistant at launch Who should buy: Android fans looking for a great large phone with long battery life. When Samsung recalled its Galaxy Note 7 last September, Android fans looking for a big-screened smartphone were left with few choices aside from Google's Pixel XL. Enter Huawei's Mate 9, which launched in the U.S. in early January. Huawei's device will also be the first smartphone to include Amazon's Alexa voice assistant built-in, which will be added through a software update promised to arrive during the first quarter of this year. With Alexa, Mate 9 will be capable of handling many of the same tasks as the Amazon Echo.