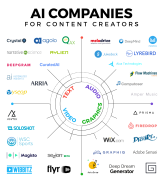 AI has been used to speed up processes and take over the busy work in multiple creative industries as of late - but can smart machines also be used to actually create content? We decided to answer that question by compiling 35 AI companies whose powerful technologies are automating the creation of four different types of content: text, audio, graphic design, and video. With these tools in hand, any content creator can tell their story in any way that they like. Automated Insights: Provides real-time content automation services that transform data into digestible narratives, visualizations and applications. AX Semantics: A software that creates content in multiple languages.

ACRCloud helps monitor copyright usage for some of the largest music labels in the West, names of which the company cannot disclose because the partnerships are confidential. The record labels apply the startup's automated content recognition (hence its name ACRCloud) algorithms to monitor works present in radio and TV programs, user-generated content on platforms like YouTube and TikTok, or whichever service that should be paying the copyright holders. It's not just the publishers and labels that keep tabs on their intellectual property. For compliance purposes, broadcasters and UGC services also proactively track the music that gets played through their channels. In the nascent short-video industry, big labels normally charge an astronomical flat fee from UGC platforms, ACRCloud co-founder Tony Li said, and the rate is often disproportionately larger than the cost of actual usage.

TikTok has helped users discover both current and past musical artists, and now it might be starting its own music streaming service. Parent ByteDance has filed a trademark application with the US Patent and Trademark Office for "TikTok Music," Insider has reported. The service would let users "purchase, play, share, download music, songs, albums, lyrics... live stream audio and video... edit and upload photographs as the cover of playlists.. [and] comment on music, songs and albums." ByteDance already has a music streaming app called Resso, but it's only available in India, Brazil and Indonesia. That app has some of the features mentioned in the trademark filing, like playlists, song-sharing and community interaction.

The Strategy Behind TikTok's Global Rise Few tech startups have taken off as quickly as Beijing-based ByteDance, the creator of the highly popular 15-second video app, TikTok. In just two years, TikTok has emerged to rival companies like Netflix, YouTube, Snapchat, and Facebook with more than one billion downloads in 150 markets worldwide and 75 languages. On the app, homemade videos showcase everything from comedy to lip syncs to dog grooming tips that users create and share on their phones. The scrappy, goofy, fast-moving content has hooked young audiences around the world. Since little translation is required, TikTok reaches well beyond other successful Chinese apps such as Tencent's messaging app WeChat, which is ubiquitous in China but mostly used elsewhere among Chinese communities keeping in touch with people back home.