Sacramento Mayor Kevin Johnson was hit with a pie Wednesday night while attending a fundraising dinner at a high school, authorities said. The assailant was taken into police custody at the event, held at Sacramento Charter High School, which Johnson's nonprofit St. Hope Public Schools began operating a decade ago. About 6:40 p.m., Johnson -- listed as a host of the fundraiser -- was approached by the man and hit with a pie, according to Crystal Strait, a spokeswoman for the mayor. Johnson tackled the assailant in a brief scuffle, the East Bay Express reported. A Sacramento police officer in Johnson's security detail requested assistance and eventually detained the man, according to a statement issued by the Sacramento Police Department.

Court refuses to mandate use of test scores in teacher evaluations

A judge in Northern California dealt a blow this week to a controversial campaign to make teachers more accountable for their students' level of achievement, the second key setback in recent months for those behind the effort. The ruling by Contra Costa County Superior Court Judge Barry Goode went against the Bay Area group Students Matter. The group's lawsuit aimed to force 13 school districts, including seven in Southern California, to make student standardized test scores a key part of teacher evaluations. Students Matter had hoped to build on a 2012 ruling against the Los Angeles Unified School District, which led to a settlement under which test scores were supposed to become part of teacher evaluations. But in Doe vs. Antioch, the case decided this week, the judge concluded that districts had broad discretion over how to use test results.

The Los Angeles County Board of Supervisors on Tuesday called for the study and reassessment of county tools meant to measure children's risk of abuse in response to the death last month of an 11-year-old boy found in a closet. The supervisors unanimously passed the motion by Supervisors Michael D. Antonovich and Mark Ridley-Thomas that calls for the county's Office of Child Protection and the Department of Children and Family Services to identify the strengths and weaknesses of a computerized program called Structured Decision Making, or SDM. The tool, which uses a list of multiple-choice questions, calculates the level of risk of abuse or neglect for a child: low, moderate, high or very high. "We don't want this boy's life to be in vain," Antonovich said. Case records released to the Los Angeles Times by DCFS showed that 11-year-old Yonatan Daniel Aguilar's risk of abuse had been marked "high" four times from 2009 to 2012 by the program. 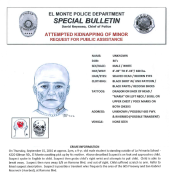 Police are looking for a man who tried to kidnap a 9-year-old boy who was standing outside his elementary school last week waiting for his mother to pick him up. The boy was outside La Primaria Elementary School in El Monte at 2 p.m. Thursday when the man walked up to him, the El Monte Police Department said Monday. The man spoke to the boy and then grabbed his wrist, police said. He tried to pull the boy away, but the child broke free, according the police department. The unidentified man ran east on Ramona Boulevard and out of sight.