At the same time, crews fan out across the battered island, erecting light poles and power lines in a block by block slog.

In Puerto Rico, half a million people are still without power

Crews are continuing to carve their way through the catastrophic hurricane damage. 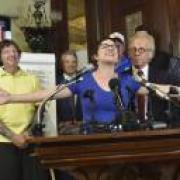 CAIN ALTO, PUERTO RICO – After months of darkness and stifling heat, Noe Pagan was overjoyed when power-line workers arrived to restore electricity to his home deep in the lush green mountains of western Puerto Rico. But to his dismay, instead of raising a power pole toppled by Hurricane Maria, the federal contractors bolted the new 220-volt line to the narrow trunk of a breadfruit tree -- a safety code violation virtually guaranteed to leave Pagan and his neighbors blacked out in a future hurricane. "I asked the contractors if they were going to connect the cable to the post and they just didn't answer," said Pagan, a 23-year-old garage worker. After an eight-month, $3.8 billion federal effort to try to end the longest blackout in United States history, officials say Puerto Rico's public electrical authority, the nation's largest, is almost certain to collapse again when the next hurricane hits this island of 3.3 million people. "It's a highly fragile and vulnerable system that really could suffer worse damage than it suffered with Maria in the face of another natural catastrophe," Puerto Rican Gov. Ricardo Rossello said.

SAN JUAN – Generators are still humming. Homes are still being repaired. Puerto Rico was hit by Hurricane Maria exactly six months ago, and the U.S. territory is still struggling to recover from the strongest storm to hit the island in nearly a century. "There are a lot of people with needs," said Levid Ortiz, operating director of PR4PR, a local nonprofit that helps impoverished communities across the island. "It shouldn't be like this.

An image of a street in Puerto Rico after Hurricane Maria hit. A blackout affected the entire island of Puerto Rico on Wednesday -- just one day after the region suffered an outage that affected 97 percent of customers. The region was already suffering from an unstable power grid following Hurricane Maria, which barreled into the island seven months ago. Electric Power Authority spokeswoman Yohari Molina told the Associated Press that crews are investigating the cause. Officials said Wednesday it could take 24 to 36 hours to fully restore power.