The performance of Cirque du Soleil's "The Beatles Love" show ended as most of the 4,500 performances over the last decade have: A packed house of 2,000 gave a standing ovation for the dozens of cast members, who took bows while traversing the circular stage at the Mirage Hotel and Casino in Las Vegas. Suddenly, however, the cheering grew even louder as ticket holders responded to an exceptionally rare coda to the show. Paul McCartney and Ringo Starr stepped onstage at the conclusion of Thursday's official 10th anniversary celebration of the hit collaboration between the French Canadian circus troupe and the band that famously "changed the face of pop music as we know it." "Thank you all for being here," McCartney, 74, said after a spotlight illuminated him and his former bandmate, the two surviving members of the Fab Four, accompanied for the event by John Lennon's widow, Yoko Ono, and George Harrison's widow, Olivia Harrison, as well as several other family members and friends who took in the performance. "This new version of'Love' is beautiful." 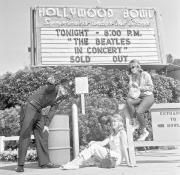 Beatles at Hollywood Bowl, Dodger Stadium get spotlight in August 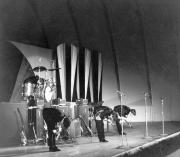 August is a key month in the Beatles' history as it relates to time the Fab Four spent in Southern California. The group played its first Los Angeles concert Aug. 23, 1964, at the Hollywood Bowl, which was recorded in hopes of being released as a live album. The Beatles returned a year later for two more Hollywood Bowl shows Aug. 29 and 30, 1965, both of which also were recorded after record company executives decided the 1964 recordings overall weren't of sufficient quality to release on their own. This weekend also brings the 50th anniversary of their performance at Dodger Stadium on Aug. 28, 1966, the next-to-last concert the quartet played before quitting live performance entirely after their show the next day, at Candlestick Park in San Francisco. All four of the L.A. shows in 1964-66 were promoted by then KRLA-AM disc jockey Bob Eubanks, who often tells of how he took a second mortgage out on a house he owned to come up with the money to bring the Beatles to L.A. the first time around.

Ringo Starr's annual "Peace and Love" ceremony for his birthday seems to get bigger each year, and although last year's event marking his 75th birthday was a star-packed blowout, Thursday's festivities in Hollywood appeared to push the needle up at least one more notch. As usual, a crowd of 200 to 300 fans gathered outside the Capitol Records Tower, closing down part of Vine Street north of Holywood Boulevard. A few minutes before noon, when the ex-Beatle traditionally asks fans around the world to flash the peace sign and say the words "peace and love" in whatever time zone they're in, a stream of stars, largely but not exclusively from the music world, emerged from the Capitol building and joined Starr on a riser in front of the crowd and a couple of dozen TV camera crews. Starr got more than a little help from friends including rocker Joe Walsh, filmmaker David Lynch, fellow British Invasion singer Eric Burdon, keyboardist Benmont Tench of Tom Petty's Heartbreakers, former Eurythmics guitarist-songwriter Dave Stewart, blues-rocker Edgar Winter, comedians Howie Mandel and Richard Lewis, Starr's actress-wife Barbara Bach, Toto guitarist Steve Lukather, producer-songwriter Glen Ballard, veteran studio and touring drummer Jim Keltner, Mr. Mister bassist-singer Richard Page and his All-Starr Band drummer Greg Bissonette. "There's a lot of violence in the world, but I want you to join me today in saying'peace and love,'" Starr said.

Do you love 'Love'? Take a free back-stage tour of the Beatles-inspired Cirque du Soleil hit

Fans can enjoy a free, behind-the-scenes look at one of Sin City's most popular shows. The "Magical Technical Tour" of the set of "The Beatles Love" takes place 1 p.m. Saturday afternoons at the Mirage. The show highlights the Beatles' music and poetry, with a remixed soundtrack by Giles Martin, son of legendary Beatles producer George Martin. Visitors should arrive a few minutes before the tour's start time to make sure you don't miss it. The half-hour event offers a sneak peek at different aspects of the wizardry behind the musical production.