A warehouse in an industrial park about an hour's drive north of downtown Beijing offers a paradoxical picture of China's much-hyped, and increasingly controversial, artificial intelligence boom. Inside the building, a handful of squat cylindrical robots scuttle about, following an intricate and invisible pattern. Occasionally, one zips beneath a stack of shelves, raises it gently off the ground, then brings it to a station where a human worker can grab items for packing. A handful of engineers stare intently at code running on a bank of computers. The robots and the AI behind them were developed by Megvii, one of China's vaunted AI unicorns.

The World's Most Valuable AI Companies, and What They're Working On 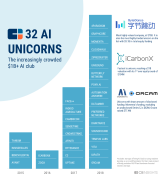 It knows the videos we might like. And it can even, perhaps, recommend the best course of action to take to maximize our personal health. Artificial intelligence and its subset of disciplines--such as machine learning, natural language processing, and computer vision--are seemingly becoming integrated into our daily lives whether we like it or not. What was once sci-fi is now ubiquitous research and development in company and university labs around the world. Similarly, the startups working on many of these AI technologies have seen their proverbial stock rise.

China has been focusing a lot on increasing its AI prowess over the years. The fuel to China's growth engine can be attributed to a kernel of four startups: SenseTime, Megvii, CloudWalk Technology and Yitu. They are also known as China's AI Quartet accounting for nearly 60% of China's computer vision market. Baidu, Alibaba, Tencent (BAT) along with DJI are the other set of companies investing heavily in cutting age technologies. Lets understand the situation taking analogy of the Dot Com bubble that popped in the late 1990s.

A new list of China's top 50 artificial intelligence companies indicates that the majority of them enjoy the backing of either the government or the country's incumbent tech giants. The China AI Top 50 Ranking was unveiled by China Money Network at the World Economic Forum in Tianjin, China on Wednesday. According to China Money Network founder Nina Xiang the report looked at more than 1,000 companies in the Chinese Ai sector and involved the participation of a broad range of industry experts. Companies were assessed on the basis of 12 items across five areas, including tech capability, maturity of products, fund-raising, business fundamentals and future potential. The report revealed that 27 out of the top 50 Chinese AI companies were backed by either government-associated funds or the leading tech giants of Baidu, Alibaba and Tencent.