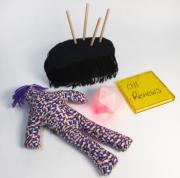 We report work on a LEGO robot capable of displaying several emotional expressions in response to physical contact. Our motivation has been to explore believable emotional exchanges to achieve plausible interaction with a simple robot. We have worked toward this goal in two ways. First, acknowledging the importance of physical manipulation in children's interactions, interaction with the robot is through tactile stimulation; the various kinds of stimulation that can elicit the robot's emotions are grounded in a model of emotion activation based on different stimulation patterns. Second, emotional states need to be clearly conveyed. We have drawn inspiration from theories of human basic emotions with associated universal facial expressions, which we have implemented in a caricaturized face. We have conducted experiments on children and adults to assess the recognizability of these expressions, and observed how people spontaneously interacting with Feelix respond to its emotional displays.

In this article, we describe an Affective Knowledge Representation (AKR) scheme to represent emotion schemata to be used in the design a variety of socially intelligent artificial agents.

In this article, we describe an Affective Knowledge Representation (AKR) scheme to represent emotion schemata to be used in the design a variety of socially intelligent artificial agents. Our approach in this article and in the applications of our AKR scheme, focuses on the notion of social expertise'' of socially intelligent agents in terms of their 1) external behavior and 2) internal motivational goal-based abilities. We claim that social expertise will be critical for the success of human-robot interaction in a variety of applications [6] and that affective phenomena such as emotions and personality are essential in terms of social expertise and autonomous behavior. AKR includes a taxonomy of affect, mood, emotion, and personality, as well as a framework for emotional state dynamics for autonomous behavior. AKR model is being applied to design and implement two collaborating robots which exhibit social expertise as specified above. We have also developed a simulator for our collaborative affective robots in order to generate performance metrics for both real and simulated environments, the Cooperative Affective Robot Simulator (CARS) which we currently describe. CARS is a reconfigurable Java-based simulator for rapid prototyping of control algorithms for cooperating affective robotic agents and it is a tool for evaluating the performance of our autonomous cooperative social robots. In particular, the simulator was configured to represent the robotic agents at the AAAI Mobile Robot Competition's Hors D'Oeuvres, Anyone?

Believability of characters has been an objective in literature, theater, film, and animation. We argue that believable robot characters are important in human-robot interaction, as well. In particular, we contend that believable characters evoke users' social responses that, for some tasks, lead to more natural interactions and are associated with improved task performance. In a dialogue-capable robot, a key to such believability is the integration of a consistent story line, verbal and nonverbal behaviors, and sociocultural context. We describe our work in this area and present empirical results from three robot receptionist test beds that operate "in the wild."