This story originally appeared on Undark and is part of the Climate Desk collaboration. Across Midwestern farms, if Girish Chowdhary has his way, farmers will someday release beagle-sized robots into their fields like a pack of hounds flushing pheasant. The robots, he says, will scurry in the cool shade beneath a wide diversity of plants, pulling weeds, planting cover crops, diagnosing plant infections, and gathering data to help farmers optimize their farms. Chowdhary, a researcher at the University of Illinois, works surrounded by corn, one of the most productive monocultures in the world. In the United States, the corn industry was valued at $82.6 billion in 2021, but it--like almost every other segment of the agricultural economy--faces daunting problems, including changing weather patterns, environmental degradation, severe labor shortages, and the rising cost of key inputs: herbicides, pesticides, and seed.

Orbiting satellites snap high-resolution images of the scene far below. In fact, it's science fiction already being engineered into reality. Today, robots empowered with artificial intelligence can zap weeds with preternatural precision, while autonomous tractors move with tireless efficiency across the farmland. Satellites can assess crop health from outer space, providing gobs of data to help produce the sort of business intelligence once accessible only to Fortune 500 companies. "Precision agriculture is on the brink of a new phase of development involving smart machines that can operate by themselves, which will allow production agriculture to become significantly more efficient. 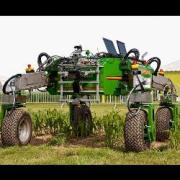 The BoniRob is a multipurpose robotic platform for agricultural applications featuring independently steerable drive wheels and adjustable track width. Field farming is "the world's oldest profession," and not just because food plants have been cultivated for over 10,000 years. Its individual practitioners are old as well, the median age rising rapidly as young people abandon the farming lifestyle (the U.S. Department of Agriculture reports a median age of 58 in 2012, up from 55 in 2002, with other countries showing similar data). Those who remain face the same repetitive work of seeding, weeding, feeding, and harvesting, the tedium of each task increasing as farms grow ever larger. However, today's agricultural robots excel at repetitive tasks, letting farmers tend to more strategic matters.

Robot reapers and AI: Just another day on the farm

The agriculture industry has hit a turning point. Faced with a massive labor crunch and environmental instability, aggressive technology deployments are no longer an option for outliers in the sector, but a necessary and critical element in the success of the farm. Enabling the transformation are a host of new developers, but also legacy companies with deep roots in agriculture. Smart technology from companies like John Deere, for example, is helping farmers to produce more with less and create more successful crops, all while having a smaller impact on the land and environment. In contrast to prevailing wisdom that you can't teach an old dog new tricks, John Deere is employing AI and machine learning in its equipment to identify and enable needed actions at a scope and speed beyond human capacity, automating farming actions through smart robotics to enable consistent and precise actions at large scale, and providing precise, geospatial intelligence generated with machine technology and coupled with cloud-stored data to enable sustainable farming.

Smart farming: How IoT, robotics, and AI are tackling one of the biggest problems of the century

The world's human population currently stands at around 7.6 billion and is projected to reach 11.2 billion by 2100. We will therefore need a food production and distribution system that can accommodate another 3.6 billion people--ideally while consuming as little additional land and leaving as small an environmental footprint as possible, in order to maintain vital ecosystem services and conserve Earth's remaining wildlife. That's clearly a challenge given that around half of the world's habitable land is under agriculture of some kind--with a high proportion of this used for livestock farming (Figure A). Figure A (click to see a larger version). Percentages are based on 2014 figures. In a widely reported recent study, Poore and Nemecek (2018) note that a shift away from meat and dairy consumption would go a long way towards relieving pressure on agricultural land and reducing environmental impact: "Meat, aquaculture, eggs, and dairy use 83% of the world's farmland and contribute 56 to 58% of food's different emissions, despite providing only 37% of our protein and 18% of our calories." Moving to a diet that excludes animal products, say the study's authors, could reclaim 3.1 billion hectares of global farmland (a 76% reduction), while reducing food's greenhouse gas emissions by 6.6 billion metric tons of CO2eq (a 49% reduction), among other environmental benefits. Of course, it will take time to effect a major shift in dietary preferences--primarily in developed countries--and global land use patterns, although emerging technologies like lab-grown meat may have an increasingly important role to play here.