The 2020 Tokyo Olympic organizing committee drew rave reviews from its future guests after completing its first organized group tour for National Olympic Committees earlier this week. Organizers of Tokyo's second Summer Games have had to weather a number of controversies to date, with issues ranging from an enormously expensive new National Stadium to logo plagiarism accusations and an overall budget that was once said to be ballooning out to ¥3 trillion ($26.6 billion). But such headaches have not detracted from the work being put in behind the scenes by the organizing committee, which the NOCs came to recognize on their visit. Representatives from Australia, Austria, Belgium, Brazil, Canada, Denmark, Finland, Ireland, Liechtenstein, Luxembourg, the Netherlands and New Zealand participated in a three-day guided visit to 26 of the Tokyo Games venues. Four more similar tours will be conducted in the lead up to 2020, with a seminar attended by all 206 NOCs to be held one year before the Olympics open. 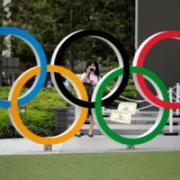 Volunteers for next summer's Tokyo Olympics and Paralympics are overwhelmingly concerned about the transmission of novel coronavirus infection during the event, a survey by the government of Tokyo showed Wednesday. In the online survey responded to by 13,480 City Cast volunteers, 75.1% also said they want the Japanese capital to create a safe environment for the volunteers to work in. City Cast volunteers will offer transport and sightseeing information to spectators and tourists during the Olympics and Paralympics, which were postponed for one year due to the pandemic. In response to a multiple-choice question about their concerns at the games, 79% of the volunteers said they are worried about the pandemic situation, followed by 49.3% who expressed concern about the impact the postponement will have on their motivation. As for training for the games, 76.7% said they want to know how to protect themselves from the coronavirus and high heat during the summer sporting events, while 58.6% said they want to be prepared for emergency situations such as using defibrillators, the survey showed.

Tokyo 2020 Olympic organizers on Saturday marked 1,000 days to go before the games begin with a parade and demonstrations of new Olympic sports in the city's Nihonbashi district. Participants wearing festive happi coats braved steady rain to carry four floats bearing large gold 1, 0, 0 and 0 figures along Chuo-dori to a stage where a display was unveiled to count down the days until the Summer Games begin on July 24, 2020. Tokyo Gov. Yuriko Koike joined Olympic minister Shunichi Suzuki and others in addressing the crowd, before athletes gave a demonstration of 3 3 basketball, BMX freestyle, sport climbing and skateboarding -- all sports that will make their Olympic debuts in 2020. "Nihonbashi is in an Olympic mood today," said Suzuki. "Seeing everyone here so interested in the 2020 Olympics convinces me that the event will be a success."

The man killed himself in March. He was an employee of a subcontractor taking part in the project to build the stadium, set to be the main venue of the 2020 Tokyo Olympics and Paralympics. The speedy decision "reflects authorities' consideration of the social impact of the case and is meaningful," the lawyer, Hiroshi Kawahito, told a news conference. "We strongly urge the prime contractor, the Olympics and Paralympics organizing committee, the Tokyo Metropolitan Government and other parties concerned not to repeat such a tragedy," Kawahito said. Kawahito said the worker joined the subcontractor Sanshin Corp. in April 2016.

Olympic rings back in Tokyo Bay; a sign of hope in pandemic

Fox News Flash top headlines are here. Check out what's clicking on Foxnews.com. The five Olympic rings are back in Tokyo Bay. They were removed for maintenance four months ago shortly after the Tokyo Olympics were postponed until next year because of the COVID-19 pandemic. The rings arrived on Tuesday after a short cruise from nearby Yokohama and are positioned on a barge in the shadow on Tokyo's Rainbow Bridge.