Don't expect Apple to follow others into the metaverse. According to the latest newsletter from Bloomberg's Mark Gurman, Apple has rejected the idea of a metaverse (in this case, an all-virtual world) for its long-rumored mixed reality headset. The very idea is "off limits," Gurman's sources claimed. The focus would be on short stints of communication, content viewing and gaming. Past rumors have hinted headset could debut as soon as this year, although its specs and target audience aren't certain.

Converging the physical and digital with digital twins, mixed reality, and metaverse apps 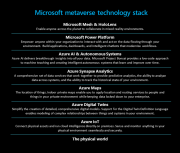 Cloud and edge computing are coming together as never before, leading to huge opportunities for developers and organizations around the world. Digital twins, mixed reality, and autonomous systems are at the core of a massive wave of innovation from which our customers already benefit. From the outside, it's not always apparent how this technology converges or the benefits that can be harnessed by bringing these capabilities together. This is why at Microsoft Build we talk about the possibilities this convergence creates, how customers are already benefitting, and our journey to making this technology easier to use and within reach of every developer and organization. Imagine taking any complex environment and applying the power of technology to create awe-inspiring experiences and reach new business heights that were previously unimaginable.

The Metaverse is HERE

Merely a handful of people know about the existence of the Metaverse and few, very few, realize the real potential of this massive opportunity that will disrupt how people live, play, work and interact with each other. When Mark announced a few weeks ago that Facebook is now a "Metaverse company", it clicked for me. The Metaverse is the future and here to stay. The "Metaverse" already existed as a concept for a few years, but the underlying infrastructure wasn't ready. Looking at technology today, I'd venture to say that it is ripe to support the Metaverse.

Whether you find yourself playing VR golf with your coworkers after a big virtual meeting or getting caught up in an NFT heist about bored apes, tech in 2022 is about to get real weird for all of us. You'd best get educated now. If 2021 was the year to know about fancy TV features like refresh rates, 2022 is the year to brush up on screens that sit a lot closer to our faces. Like it or not, tech companies like Sony, Meta, and Apple are making big pushes for VR adoption for both work and play. So, yes, you'll have to learn what the heck the "metaverse" is.

The Metaverse: A Different Perspective

The metaverse has been a hot topic of conversation recently, with many tech giants like Facebook and Microsoft staking claims. Author Neal Stephenson is credited with coining the term "metaverse" in his 1992 science fiction novel "Snow Crash". He envisioned lifelike avatars who live in realistic 3D buildings and other virtual reality environments. Correspondingly, in a technical sense, metaverse is another name for the Internet of Everything (IoE), a concept started in the early 2000s, leading to the internet of things (IoT) and its applications a scaled-down version of the IoE. Since then, various developments have made milestones on the way toward a real metaverse, an online virtual world that incorporates augmented reality (AR), virtual reality (VR), 3D holographic avatars, video, and other means of communication.