Apple may not have an official booth or presence at CES but that doesn't mean it isn't making any news at the annual industry showcase. The iPhone-maker and electronics giant has announced partnerships with Samsung, LG and Vizio to bring its AirPlay 2 streaming technology to the latter's TVs. AirPlay 2 tech was previously largely limited to Apple's own Apple TV streaming boxes and speakers from Sonos, Beats, and Bose, among others. By bringing the tech to TVs viewers who own Apple devices will soon be able to wirelessly stream what is on their iPhone, iPad or Mac screens to their big screens. This includes not only streaming videos from apps like YouTube, Netflix or HBO but also games, photos, and music. 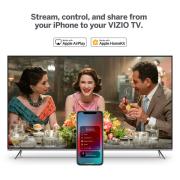 When it comes to pure, cutting the cord TVs, Amazon's Fire TV Edition paved new ground in 2018. It was low-priced and aimed at folks who were happy ditching cable, plugging in an antenna and using the set to watch Internet programming. Vizio's new V436-61, just out, goes even further. It does all of that, and more. Instead of just being able to use voice commands via the Amazon Alexa assistant, Vizio lets you use Apple's Siri and the Google Assistant as well.

TV set manufacturer Vizio is set to launch a new line of TVs with built-in Google Cast for watching online entertainment in the living room. The company has joined forces with Google for a line of TVs with built-in Chromecast, which means that any video that's playable on your smartphone or tablet should be able to be "cast" to the TV as well. Google Chromecast is the 35 dongle that connects to your TV to bring in internet entertainment from the likes of Netflix and YouTube. By ditching the dongle, TV fans won't have to worry about re-charging the device. It also opens up having another slot for a HDMI device.

Is the TV remote history?

Vizio is ditching the old-fashioned remote control in favor of a 6" tablet with their new P-Series televisions. Next week TV set manufacturer Vizio will debut a new kind of TV set that ditches the familiar remote we've known to love, hate and lose, with instead a supplied 6-inch tablet. The controller acts like a traditional, internet connected tablet, except that it also turns up and down your volume, changes channels, opens and closes apps and brings in new ones. And if you lose it--no problem. You just download the new Vizio app to your phone, and use it there.

Vizio's New TV Is Controlled Entirely By An App

There are a lot of products that push technology for technology's sake: smart floss dispensers, smart plates, smart water bottles. But the television has lagged behind in terms of meaningful innovation. Of course, screen resolution has gotten better, and TV sets are thinner than they've ever been. But the way we control our TVs and consume content through them haven't changed since the invention of the remote control. With its new P-Series televisions, Vizio is pushing the industry towards a welcome eventuality: a world without TV remotes.