Ukraine And Russia Are At War: Russian Soldiers Arrested By Kiev In 'Act Of Gross Provocation,' Kremlin Claims

Russia demanded Ukraine return two Russian soldiers reportedly abducted from the Crimean peninsula after Kiev said it picked up the deserters because they defected to Russia from the Ukrainian military following Moscow's annexation of the Crimean peninsula. Russia called the arrest "another act of gross provocation," Reuters reported Tuesday. The Russian defense ministry said the soldiers were "illegally detained" Sunday in the former Ukrainian region annexed by Moscow in 2014. The soldiers, Ensign Maxim Evgenyevich Odintsov and Junior Sergeant Alexander Vyacheslavovich Baranov, were transported to Ukraine's Mykolaiv region, north-west of the peninsula, BBC News reported. Russia claimed Ukraine would use "psychological and physical pressure" to get confessions from the soldiers "for crimes allegedly committed against Ukraine."

Ukraine has declared martial law in part of the country after Sunday's capture of three of its naval vessels and 23 crew members by Russia. Lawmakers backed President Petro Poroshenko's request to introduce it in regions mostly bordering Russia for 30 days starting from 28 November. The authorities can now restrict public rallies and regulate the media. Some MPs expressed fears Mr Poroshenko could suspend a presidential poll on 31 March 2019 - a claim he firmly denied. Sunday's naval clash was off the coast of Crimea, annexed by Russia in 2014. 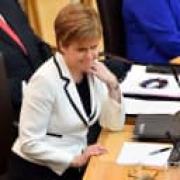 MOSCOW/KIEV - Russian President Vladimir Putin has signed a decree offering passports to people in breakaway regions of eastern Ukraine, triggering calls for more sanctions against Moscow from the incoming leadership in Kiev. "This is yet more proof of Russia's real role as an aggressor state that's waging a war against Ukraine," President-elect Volodymyr Zelenskiy's office said on Facebook after the order was posted on the Kremlin website Wednesday. Ukraine "is counting on increasing diplomatic and sanction pressure" by the international community against Russia. The Kremlin leader's citizenship offer comes three days after Zelenskiy, a comic, won a landslide in Sunday's Ukrainian presidential election. Putin has yet to respond publicly to his victory, and Kremlin spokesman Dmitry Peskov on Monday downplayed the possibility of the two leaders working together.

A Ukrainian pilot who was sentenced to jail in connection with the deaths of two Russian journalists and became a symbol of her nation's resistance to Moscow's aggression was freed Wednesday as part of a swap for two Russian servicemen. Nadiya Savchenko, Ukraine's first female combat pilot, spent almost two years behind bars in Russia after being captured by pro-Russian separatist militants in June 2014 amid a bloody conflict in the Donetsk and Luhansk regions in southeastern Ukraine. A Russian court convicted her in March of complicity in the death of the two journalists by directing the artillery fire that killed them and sentenced her to 22 years in jail. She denied the charges and insisted she was kidnapped and forcibly taken to Russia shortly before the journalists were killed. "I am free," Savchenko said in televised remarks while standing next to Ukrainian President Petro Poroshenko at the Boryspil airport near the capital, Kiev, minutes after a presidential plane flew her from Russia.