Watch a Roborace's driverless car zooming around a track 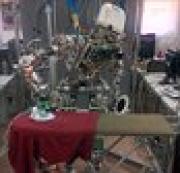 Roborace, the firm hoping to kick-start the future of driverless racing, has released incredible footage taken inside one of its self-driving vehicles while in action. The cockpit footage was taken during the first full-speed, self-driven lap of the Formula E track in Berlin earlier this month. The car is seen hitting speeds of 124mph (200 km/h), and avoids colliding with the track walls. The Robocar weighs almost 1,000 kilograms (2,200 lbs), and measures 4.8 metres long (15.7 ft) and two metres wide (6.5 ft). Four motors, each with 300kW of power and a 540kW battery, allow the car to reach dizzying speeds of over 320kph (200mph).

As for Roborace itself, it'll consist of ten teams, each with two of these NVIDIA-powered vehicles; the races themselves will last for one hour. The Drive PX 2 itself will work with a host of sensors, including radar, GPS, LIDAR, cameras and high-definition mapping sensors. And the more these cars race, the more the Drive PX 2 will learn and improve over time. As NVIDIA said in its press release, each team would have identical vehicles -- the only competitive advantage will come in the software each team builds to control their cars. The first Roborace series will kick off this September.

Nvidia (NVDA) is well-known for its autonomous vehicle efforts, and at the company's GTC 2021 conference, it's rolling out three technologies to support its future self-driving capabilities: Nvidia Drive Hyperion 8, Drive Chauffeur, and Drive Concierge. Taken together, the technologies help Nvidia push deeper into the autonomous car space. What's more, the technologies provide drivers and passengers with their own personal AI assistant while their car drives them down the street. Drive Hyperion 8 combines a series of sensors including 12 cameras, nine radars, 12 ultrasonic sensors, and one front-facing lidar. The whole setup is meant to be modular so automakers can take and leave what they want.

Michelin's 3D-printed tire is as stunning as it is futuristic

Looking at Michelin's new concept tire (dubbed the "Vision") is like staring at a mesmerizing painting of future wheels. The blue webbed structure looks nothing like a typical black tire, but feels just as sturdy. It also boasts a unique set of advanced, environmentally friendly features. Many of these principles are already being used in existing tires, while others are still fairly abstract ideas. The Vision is a proof of concept combining ideas old and new, and it gives us a glimpse at Michelin's plans for what it calls "sustainable mobility."

Nvidia has on Tuesday announced Drive Constellation, a cloud-based system for testing autonomous vehicles using photorealistic simulation via virtual reality, aiming to speed up the delivery of autonomous cars in a safer and more scalable way. According to Nvidia senior director of Automotive Danny Shapiro, every two minutes, four to five people die in vehicle-related accidents -- totalling 3,000 people per day globally. "This is a big problem, so we're really focused on bringing the hardware and software to solve the challenge," he said. Drive Constellation is a computing platform based on two different servers. The first runs the Nvidia Drive Sim software to simulate an autonomous vehicle's sensors, such as cameras, lidar, and radar; while the second boasts Nvidia Drive Pegasus, which is an artificial intelligence car computer that runs the autonomous vehicle software stack and processes the simulated data as if it was being fed in from sensors on a real car.