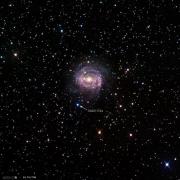 Scientists have known for long now than a Type Ia supernova is primarily a white dwarf star in a binary system collapsing in on itself and then exploding. And while these stellar explosions have been used to measure the pace of acceleration at which the universe is expanding, astronomers were not sure at all about the nature of the other star in the binary system, which could either be a gigantic star an even smaller white dwarf than the one that exploded. However, the early detection of a Type Ia supernova earlier this year could have narrowed that down significantly. On March 10, an assistant professor at the University of Arizona, David Sand, spotted a Type Ia supernova 55 light-years away from Earth. It was not only one of the closest supernovae seen in recent years, but also one of the earliest to be seen after exploding.

The first burst of light given off by an exploding star has been captured for the first time by an amateur astronomer in Argentina.

A star exploded before the time of the dinosaurs, and average people just helped space scientists find it. The stellar explosion called a supernova is 970 million light years away, so we are just seeing it now as it was 970 million years ago -- well before dinosaurs dominated Earth. Australian National University scientists have been searching for supernovas and asked the public for help. Hundreds signed up, and, the university said, two online volunteers from Europe recently helped them spot one galaxy's supernova. After the Belgian woman and Scottish man alerted the team, the scientists aimed a telescope at it to confirm what the object was in just a day's time.

Could supernovas have altered the development of life on Earth?

Scientists sifting through rare isotopic signatures in Earth's crust beneath the sea have found a signal from the heavens: evidence of nearby supernova explosions in just the last few million years. The discoveries, described in the journal Nature, shed light on the impact that such stellar deaths can have on our home planet, and may help scientists understand whether or not these events have affected the course of life on Earth. Supernovas are the powerful, violent deaths of massive stars, whose deaths seed the rest of the universe with heavy elements that aren't made otherwise. So while supernovas have helped seed other stars and their planets with rarer elements, astronomers have long wondered what would happen if such fireworks went off a little too close to our planetary home. "For more than half a century, astronomers have speculated that supernovae have occurred close enough to Earth to affect the planet, possibly contributing to mass extinctions or climate," Adrian Melott of the University of Kansas, who was not involved in the study, wrote in a commentary on the paper.