When it comes to culture and entertainment, Japan has a rich history spanning ancient legends and sports to modern manga and video games. Now a new generation of inventors is drawing on this culture to create sports with a 21st-century twist -- helping players feel "superhuman" through technology or other special equipment. The Superhuman Sports Society, a Tokyo-based group of researchers and game designers, has certified 12 new sports since its launch in 2015, including Hado, or Wave Motion in English. In Hado, players in head-mounted augmented-reality displays and armband sensors dodge waves of light as they fire energy balls at each other in a virtual arena. The game is similar to the action seen in the "Dragon Ball Z" manga-anime franchise and "Street Fighter" video games.

Machines That Will Think and Feel 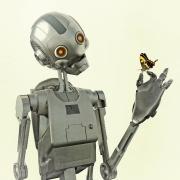 Artificial intelligence is breathing down our necks: Software built by Google startled the field last week by easily defeating the world's best player of the Asian board game Go in a five-game match. Go resembles chess in the deep, complex problems it poses but is even harder to play and has resisted AI researchers longer. It requires mastery of strategy and tactics while you conceal your own plans and try to read your opponent's. Mastering Go fits well into the ambitious goals of AI research. It shows us how much has been accomplished and forces us to confront, as never before, AI's future plans.

Telepathic superhumans could be a reality 'within decades'

Biohackers, or grinders, are people who hack their own bodies with do-it-yourself devices. They practice body modification in an effort to extend and improve human capabilities. They usually turn to body modification experts like piercing artists to perform the implant procedures - but many do it themselves too. One of the first biohackers was Kevin Warwick, an engineer and the Vice-Chancellor at Coventry University who had an RFID (Radio-Frequency Identification) chip implanted into his arm which allowed him to control devices such as lights by simply snapping his fingers. Professor Kevin Warwick undertook a ground-breaking experiment with an implanted computer chip in his arm.

'Superhuman' A.I. Can Locate Any Image

But there's still that sticky question about Art, with a capital A. Even if a machine does generate original images -- or objects or manuscripts -- do these creations truly constitute artistic expression? Developed by painter and computer scientist Harold Cohen, the program has gone through different stylistic periods in which it has created both highly abstract and highly representative images. AARON's drawings are created though a system of custom printing machines and have been exhibited at the Tate Gallery in London. But while Cohen describes AARON as an A.I., he has officially left the issue of Art as an open question. In an effort to resolve the issue, computer researcher Mark Riedl recently proposed a new variation on the Turing Test, designed to identify true artificial intelligence.

Sebastian Thrun: Of course, you mean that ironically – but the answer is actually surprisingly simple. Human beings are the center of our world. Creativity and value systems are what make us human. And for all of us, our fellow humans are the most important elements of our life. It always revolves around the same thing: giving human beings super-human powers.