When the BBC programme Planet Earth came out a decade ago, it transformed how viewers saw their planet. The first natural history series to be filmed in high definition, it captivated a global audience of more than half a billion people by giving them an unprecedented view of life on Earth. Narrated by Sir David Attenborough, Planet Earth II is at 20:00 on Sunday, 6 November on BBC One.

Planet Earth II has only just started airing in North America, but already the BBC is working on a big-budget nature follow-up. Blue Planet II, a successor to the original Blue Planet series from 2001, will be broadcast in the UK later this year. It'll be narrated by veteran presenter Sir David Attenborough (who else) and return to our world's mysterious oceans, capturing and explaining the creatures that lurk beneath the surface. These include snub fin dolphins, hairy-chested Hoff crabs and a reef octopus. The new series will consist of seven 60-minute episodes.

Earth sized'rogue' planets that could harbour life may roam the darkness of space between the stars, according to new research. The wandering worlds, known as free floating, rogue or orphan planets, have been detected using a technique called gravitational micro-lensing. A team of Polish researchers found that Jupiter-like rogue planets may be at least ten times less common than previously thought. But Earth-sized ones, which are harder to spot but could support life, could be more widespread. Pictured is artist's impression of a gravitational microlensing event by a free-floating planet.

This Week's Night Sky: See the Red Planet for Yourself 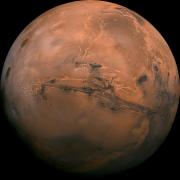 Remember that the glare coming off the moon may make the cluster fainter than usual, so if you don't see it, try again later in the week when skies are darker. Shining at magnitude 6.1 and about the size of the moon's disk in the sky, M67 appears bright in any binoculars and shows beautiful chains of stars. In reality, it measures some 12 light-years across and sits about 2,600 light-years away from Earth.