The Justice Department's special counsel announced the indictment Friday of a notorious Russian troll farm -- charging 13 individuals with an audacious scheme to criminally interfere with the 2016 U.S. presidential election. 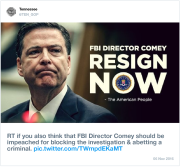 Twitter is finally following Facebook's lead and coming clean about how Russian trolls abused their platform in spreading misinformation ahead of the 2016 U.S. presidential election. But even in transparency, Twitter is still clouding the issue by literally deleting the evidence.

U.S. knocked Russian troll operation offline on the day of the 2018 midterm election

Russian trolls were awfully quiet during the 2018 Midterms. Now we know that's thanks in part to a preemptive cyber attack by the United States Military. According to a report by The Washington Post, U.S. Cyber Command launched its "first offensive cyber campaign against Russia" on the day of the 2018 midterm elections. The cyber attack, backed by intelligence from the National Security Agency, reportedly took the Kremlin-linked Russian troll farm, Internet Research Agency, offline for the day. Officials say the purpose of the election day operation was to block any possible disinformation campaigns from Russia regarding the Midterm results.

The 9 craziest things from latest Mueller indictment against Russian trolls

Another bombshell dropped on Friday afternoon when the special counsel investigating led by Robert Mueller announced indictments against Russian troll group Internet Research Agency and a dozen other individuals for "operations to interfere with the U.S. political system, including the 2016 U.S. presidential election."

Sixteen months after the 2016 election, it's no longer a surprise that the Russian government stooped to lies and disinformation to push a pro-Trump, hyper-divisive agenda. But now it's clear those trolls went a step further: Actually stealing the identities of real Americans to impersonate US voices online and hide their tracks.