Self-Driving Trucks Will Carry Mail in U.S. for the First Time

The United States Postal Service is going to put mail on self-driving trucks. Starting this week, letters and packages moving between Phoenix and Dallas will travel on customized Peterbilt trucks run by TuSimple, an autonomous startup based in San Diego. There will be five round trips between the two cites, with the first haul leaving from Phoenix this morning. It's the first time that the Postal Service has contracted with an autonomous provider for long-haul service. "This pilot is just one of many ways the Postal Service is innovating and investing in its future," the USPS said in a press release that cited the possibility of using "a future class of vehicles" to improve service, reduce emissions and save money.

San Diego-based startup TuSimple said its self-driving trucks will begin hauling mail between USPS facilities in Phoenix and Dallas to see how the nascent technology might improve delivery times and costs. A safety driver will sit behind the wheel to intervene if necessary and an engineer will ride in the passenger seat. If successful, it would mark an achievement for the autonomous driving industry and a possible solution to the driver shortage and regulatory constraints faced by freight haulers across the country. The pilot program involves five round trips, each totaling more than 2,100 miles (3,380 km) or around 45 hours of driving. It is unclear whether self-driving mail delivery will continue after the two-week pilot. 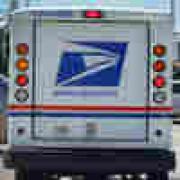 Embark co-founders Alex Rodrigues, left, and Brendon Moak with their fleet of autonomous semi-trucks at the startup's operations center in Ontario, California. Embark Trucks, a robotic tech upstart led by two young Canadian computer scientists, hired a key member of Tesla's Autopilot team to help its self-driving trucks better see and understand their surroundings and highway conditions. Zeljko Popovic, an engineer with a background in robotics who joined Tesla over six years ago and created and ran the Perception Team for Autopilot, is now Perception Lead for San Francisco-based Embark, the company said. He'll report to Embark CTO Brandon Moak and focus on boosting the accuracy and distance at which the cameras, radar and laser lidar sensors on its semi-trucks detect other vehicles, as well as leading mapping, localization and machine learning efforts. "Self-driving perception systems need huge amounts of data to train their machine learning algorithms, which means gathering high-quality data is key for Embark's perception team," said CEO Alex Rodrigues.

The self-driving freight truck startup TuSimple has been carrying mail across the state of Arizona for several weeks. UPS announced on Thursday that its venture capital arm has made a minority investment in TuSimple. The announcement also revealed that since May TuSimple autonomous trucks have been hauling UPS loads on a 115-mile route between Phoenix and Tucson. UPS confirmed to Gizmodo this is the first time UPS has announced it has been using TuSimple autonomous trucks to deliver packages in the state. Around the same time as the UPS and TuSimple program began, the United States Postal Service and TuSimple publicized a two-week pilot program to deliver mail between Phoenix and Dallas, a 1,000 mile trip.