Can playing together help us live together? 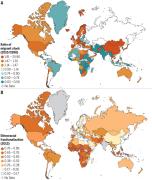 Immigration and globalization have spurred interest in the effects of ethnic diversity in Western societies. Most scholars focus on whether diversity undermines trust, social capital, and collective goods provision. However, the type of prosociality that helps heterogeneous societies function is different from the in-group solidarity that glues homogeneous communities together. Social cohesion in multiethnic societies depends on whether prosocial behavior extends beyond close-knit networks and in-group boundaries. We identify two features of modern societies--social differentiation and economic interdependence--that can set the stage for constructive interactions with dissimilar others. Whether societal adaptations to diversity lead toward integration or division depends on the positions occupied by minorities and immigrants in the social structure and economic system, along with the institutional arrangements that determine their political inclusion. Most Western countries already are or are destined to become multiethnic societies thanks to recent patterns of migration and globalization. Growing immigration to North America and Western Europe (Figure 1A) has commanded particular attention. Increased ethnic heterogeneity has renewed scholarly interest in intergroup dynamics of cooperation and discrimination and spurred debates over the consequences of ethnic diversity for social trust and democratic integration.

From relentless online trolling to this summer's appalling terror attacks, it's hard to remember humans are (mostly) kind. But that's the message of a new study that shows groups of humans do not clash as much with their peers as other primates do. Researchers found humans are far more open to exploring relationships with strangers, which helps us secure limited resources and may have helped our ancestors thrive. Researchers from the University of California Santa Barbara and the Max Planck Institute for Evolutionary Anthropology studied human kindness and cooperation in Bolivia. In 2014, researchers from the University of Minnesota declared chimpanzees to be inherently violent, with males in particular proving to be the most aggressive of the sexes.

A Scholar of Extremism on How Religious Conflict Shapes Sri Lanka

On Easter Sunday, terrorists slaughtered nearly three hundred people in Sri Lanka, in coördinated attacks at three churches and three luxury hotels. The government has said that the attacks were the work of suicide bombers from a single extremist group, and that thirteen people are being held in police custody. On April 11th, the country's deputy inspector general had issued a letter to government officials saying that National Thowheed Jama'ath, a radical Islamist group based in South India, was planning a terrorist attack, but the Prime Minister, Ranil Wickremesinghe, has said that he did not receive the warning. Since the attack, the government has shut down Facebook and other social-media platforms, which recently were used to incite anti-Muslim violence in the country. Sri Lanka has experienced intermittent violence since the end of a brutal civil war, which lasted from 1983 to 2009.

Indirect Reciprocity and the Evolution of Prejudicial Groups

Prejudice is a human attitude involving generally negative and unsubstantiated prejudgement of others. When acted upon, this results in wide-ranging behaviours such as sexism, ageism and discrimination against sexual preference1,2,3 through to ethnic, racial, nationalistic and religious extremism4,5, with bias and intergroup conflict characterised as a "problem of the century"6. Most recently, prejudice has been highlighted in connection to global political events: for example anti-immigration prejudice was a strong correlate of support for Brexit7. The human disposition to categorize others through their group identity creates an opportunity for discrimination8,9,10. As a consequence of in-group formation11, which occurs through cultural or biological identification with others, or as a consequence of identity-less strangers mutually cooperating12, bias can take hold in two ways.