Mental equilibrium is essential for an economically productive life in both industrialized and developing countries. Accumulating evidence shows that mental ill-health and poverty tend to be traveling partners, but which is the cause? Ridley et al. reviewed the literature on natural and controlled economic experiments involving individuals living in poverty. The authors sought to resolve the mechanisms whereby poverty triggers mental illness and how mental illness compounds poverty. Their results reveal the benefits of cash support and of low-cost therapeutic interventions for those suffering from mental illness under poverty. Science , this issue p. [eaay0214][1] ### BACKGROUND Depression and anxiety disorders are together responsible for 8% of years lived with disability globally. Contrary to widely held preconceptions, these are not diseases of affluence. Within a given location, those with the lowest incomes are typically 1.5 to 3 times more likely than the rich to experience depression or anxiety. ### ADVANCES Recent research has established a bidirectional causal relationship between poverty and mental illness. Researchers have begun to isolate the underlying mechanisms, which can guide effective policies to protect the mental health of those living in poverty. We now know that loss of income causes mental illness. Negative income shocks, such as bad harvests due to poor rainfall or job losses due to factory closures, worsen mental health. Conversely, cash transfers and broader antipoverty programs reduce depression and anxiety in randomized trials. Multiple mechanisms mediate this causal chain. Poverty is associated with volatile income and expenditures. The resulting worries and uncertainty can worsen mental health. Providing health, employment, or weather insurance, or other ways of smoothing shocks, may thus lower depression and anxiety. Living in inadequate housing in low-income neighborhoods, the poor are also more exposed to environmental stresses such as pollution, temperature extremes, and challenging sleep environments, which can cause mental illness. Early-life conditions—poverty experienced in childhood and in utero—increase the likelihood of poor nutrition and other stressors, resulting in impaired cognitive development and adult mental illness. This makes a strong case for providing financial support to pregnant women and caregivers of young children. Poverty is also associated with worse physical health; greater exposure to trauma, violence, and crime; and lower social status, each of which may affect mental health. Mental illness in turn worsens economic outcomes for individuals. Studies show that randomized interventions to treat mental illnesses increase days worked. Depression and anxiety directly affect the way people think, by capturing their attention and distorting their memory. Such effects are likely to influence economic preferences and beliefs and thus distort important economic decisions made by individuals, such as how much to work, invest, and consume. Reduced concentration and greater fatigue reduce work productivity, and the social stigma of mental illness may further worsen labor-market outcomes. Mental illness appears to increase the likelihood of catastrophic health expenditures for individuals through its comorbidity with chronic illnesses such as diabetes and heart disease. Mental illness may also hinder education and skill acquisition among youth and exacerbate gender inequalities through its disproportionate prevalence among women. Parental mental illness can also influence children’s cognitive development and educational attainment, transmitting mental illness and poverty across generations. ### OUTLOOK The burden of mental illness is likely to increase in the coming decades. Although richer individuals within a given location are less likely to be mentally ill, richer countries do not have lower rates of mental illness. Thus, aggregate economic growth alone is unlikely to reduce mental illness. Climate change is likely to worsen mental health, both directly through the effect of higher temperatures on mood and through reductions in agricultural yields because of changes in rainfall and water supply, more frequent weather-related disasters, and an increased likelihood of violent conflict. Technological change and globalization create large overall economic gains but also concentrated groups of losers whose mental health may be compromised. The spread of social media and associated technologies may also be harming mental health, especially among adolescents. Policy action on mental health is vital, as is interdisciplinary research on the mechanisms that link poverty and mental illness. Recently developed approaches to psychotherapy, delivered through nonspecialist providers, provide a scalable and effective approach to improving mental health in low-income countries. Given the associated economic benefits of improved mental health, such interventions should be a part of the antipoverty toolkit alongside more traditional economic interventions. Understanding the most effective combination of economic and psychological support in different populations is an important next step. A priority for research is testing for a mental health–based “poverty trap.”If such poverty traps exist, then powerful one-time interventions will have large long-run effects as gains in mental health and economic outcomes reinforce one another. Evaluations of economic interventions should routinely measure mental health, and long-run evaluations of mental health interventions should measure potential impacts on poverty and other key economic outcomes. The causal relationship between poverty and mental health is even more pertinent given the ongoing pandemic, which has disproportionately affected the poor and may have lasting impacts on their economic and mental well-being. A massive investment in mental health was already long overdue. It has now become critically urgent. ![Figure][2] The causal relationship between poverty and common mental illnesses. This schematic shows the principal mechanisms we identify, on the basis of theory and empirical evidence, through which poverty and depressive and anxiety disorders interact. Why are people who live in poverty disproportionately affected by mental illness? We review the interdisciplinary evidence of the bidirectional causal relationship between poverty and common mental illnesses—depression and anxiety—and the underlying mechanisms. Research shows that mental illness reduces employment and therefore income, and that psychological interventions generate economic gains. Similarly, negative economic shocks cause mental illness, and antipoverty programs such as cash transfers improve mental health. A crucial step toward the design of effective policies is to better understand the mechanisms underlying these causal effects. [1]: /lookup/doi/10.1126/science.aay0214 [2]: pending:yes

Artificial intelligence (AI) has demonstrated great progress in the detection, diagnosis, and treatment of diseases. Deep learning, a subset of machine learning based on artificial neural networks, has enabled applications with performance levels approaching those of trained professionals in tasks including the interpretation of medical images and discovery of drug compounds (1). Not surprisingly, most AI developments in health care cater to the needs of high-income countries (HICs), where the majority of research is conducted. Conversely, little is discussed about what AI can bring to medical practice in low- and middle-income countries (LMICs), where workforce shortages and limited resources constrain the access to and quality of care. AI could play an important role in addressing global health care inequities at the individual patient, health system, and population levels. 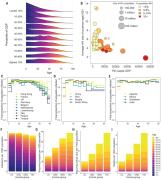 Lower-income countries have recognized the potential impact of coronavirus disease 2019 (COVID-19) from observing ongoing epidemics. Many have intervened quickly and early with measures to slow viral transmission, which may partly explain the low rates observed so far in these countries. Walker et al. calibrated a global model with country-specific data (see the Perspective by Metcalf et al. ). Despite the potentially protective effects of younger demographics, the closer intergenerational contact, limitations on health care facilities, and frequency of comorbidities in lower-income countries require sustained nonpharmaceutical interventions (NPIs) to avoid overwhelming health care capacity. As a result of strict NPIs, the protective effects of immunity will be reduced, and it will be important to improve testing capacity. Ensuring equitable provision of oxygen and—when they are ready—pharmaceutical interventions should be a global priority. Science , this issue p. [413][1]; see also p. [368][2] The ongoing coronavirus disease 2019 (COVID-19) pandemic poses a severe threat to public health worldwide. We combine data on demography, contact patterns, disease severity, and health care capacity and quality to understand its impact and inform strategies for its control. Younger populations in lower-income countries may reduce overall risk, but limited health system capacity coupled with closer intergenerational contact largely negates this benefit. Mitigation strategies that slow but do not interrupt transmission will still lead to COVID-19 epidemics rapidly overwhelming health systems, with substantial excess deaths in lower-income countries resulting from the poorer health care available. Of countries that have undertaken suppression to date, lower-income countries have acted earlier. However, this will need to be maintained or triggered more frequently in these settings to keep below available health capacity, with associated detrimental consequences for the wider health, well-being, and economies of these countries. [1]: /lookup/doi/10.1126/science.abc0035 [2]: /lookup/doi/10.1126/science.abd1668

Science and health for all children with cancer

Each year 429,000 children and adolescents aged 0 to 19 years are expected to develop cancer. Five-year survival rates exceed 80% for the 45,000 children with cancer in high-income countries (HICs) but are less than 30% for the 384,000 children in lower-middle-income countries (LMICs). Improved survival rates in HICs have been achieved through multidisciplinary care and research, with treatment regimens using mostly generic medicines and optimized risk stratification. Children's outcomes in LMICs can be improved through global collaborative partnerships that help local leaders adapt effective treatments to local resources and clinical needs, as well as address common problems such as delayed diagnosis and treatment abandonment. Together, these approaches may bring within reach the global survival target recently set by the World Health Organization: 60% survival for all children with cancer by 2030. In recent years, 5-year survival rates for children with cancer (typically equating to cure) have risen to 80% in most high-income countries (HICs) (1–4). This progress reflects partly the optimized use of conventional therapies (e.g., cytotoxic drugs) through better risk stratification of patients.

Strategies to Tackle the Global Burden of Diabetic Retinopathy: From Epidemiology to Artificial Intelligence

Diabetes is a global public health disease projected to affect 642 million adults by 2040, with about 75% residing in low- and middle-income countries. Diabetic retinopathy (DR) affects 1 in 3 people with diabetes and remains the leading cause of blindness in working-aged adults. There are 3 broad strategic imperatives to prevent blindness caused by DR. Primary prevention requires preventing or delaying the onset of DR in those with diabetes by systems-level lifestyle modifications such as increasing physical activity or dietary modifications, pharmacological interventions for glycaemic and blood pressure control, and systematic screening for the onset of DR. Secondary prevention requires preventing the progression of DR in patients with DR by continuing systemic risk factor control, regular screening to monitor for the progression of mild DR to vision-threatening stages, and the development and implementation of evidence-based guidelines for managing DR. In this aspect, telemedicine-based DR screening incorporating artificial intelligence technology has the potential to facilitate more widespread and cost-effective screening, particularly in low- and middle-income countries. Tertiary prevention of DR blindness has been the main focus of the clinical ophthalmology community, classically based on laser photocoagulation treatment and ocular surgery but with an increasing use of anti-vascular endothelial growth factor (anti-VEGF) for vision-threatening DR. Evidence from serial epidemiological studies shows blindness due to DR has declined in high-income countries (e.g., the USA and UK) due to coordinated public health education efforts, increased awareness, early detection by DR screening, sustained systemic risk factor control, and the availability of effective tertiary level treatment. However, the progress made in reducing DR blindness in high-income countries may be overwhelmed by the increasing numbers of patients with diabetes and DR in low- and middle-income countries (e.g., China, India, Indonesia, etc.).