President Trump issued an executive order Feb. 28 directing federal agencies to revise the Clean Water Rule, a major regulation published by the Environmental Protection Agency and the Army Corps of Engineers in 2015. The rule's purpose is to clarify which water bodies and wetlands are federally protected under the Clean Water Act. EPA Administrator Scott Pruitt led a multi-state lawsuit against the rule as Oklahoma attorney general, and has called it "the greatest blow to private property rights the modern era has seen." At the Colorado Water Institute at Colorado State University, we work in partnership with the farm and ranch community to find solutions to difficult western water problems. Farmers and ranchers often express frustration with one-size-fits-all worker protection, food safety, animal welfare, immigration, endangered species and environmental regulations. 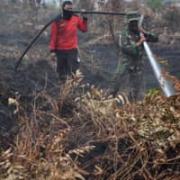 TRAVERSE CITY, MICHIGAN – The Trump administration is revoking an Obama-era regulation that shielded many U.S. wetlands and streams from pollution but was opposed by developers and farmers who said it hurt economic development and infringed on property rights. Even before the official announcement, scheduled for later Thursday, environmental groups blasted the administration's action, the latest in a series of moves to roll back environmental protections put into place under former President Barack Obama. The Waters of the United States rule being revoked defines which waterways are subject to federal regulation. "This action officially ends an egregious power grab and sets the stage for a new rule that will provide much-needed regulatory certainty for farmers, home builders and property owners nationwide," Environmental Protection Agency chief Andrew Wheeler and R.D. James, assistant secretary of the Army for civil works, wrote in a column published Thursday by the Des Moines Register. Since enactment of the Clean Water Act in 1972, the federal government has gone beyond protection of navigable waterways and their major tributaries to assert jurisdiction over "isolated ponds and channels that flow only after it rains," the officials wrote.

Another bid by President Trump to "repeal and replace" a major Obama administration achievement recently got a boost when the Environmental Protection Agency, now led by anti-environmentalist Scott Pruitt, moved to repeal a 2015 clean water rule. The Waters of the United States rule was meant to protect the drinking water supply for more than 100 million Americans by clarifying which waterways are covered by the landmark Clean Water Act of 1972, which limits the chemicals and other pollutants that can be discharged into "navigable" U.S. waters. The interpretation of previous rules was muddied by a pair of U.S. Supreme Court decisions, and the 2015 rule brought a good measure of clarity. When Trump in February signaled his intention to scrap the rule, which is widely known as WOTUS, he complained that it covers puddles and ditches and gets in the way of farmers trying to feed a hungry nation and builders trying to keep the economy on track. That's pure Trump -- remolding the facts to suit his purposes.

EPA moves to nix Obama's 'waters of the US' regulation

The Trump administration Tuesday announced plans to scrap an Obama-era environmental rule that had been attacked as federal overreach by farmers and property-rights groups. The Environmental Protection Agency and Army Corps of Engineers said they would withdraw Obama's 2015 "waters of the United States" -- or WOTUS -- regulation, which expanded the number of waterways covered by the federal Clean Water Act. The agencies described a withdrawal process as an interim step and promised a broader review of which waters should fall under federal jurisdiction. "We are taking significant action to return power to the states and provide regulatory certainty to our nation's farmers and businesses," EPA Administrator Scott Pruitt said, adding that the re-evaluation would be "thoughtful, transparent and collaborative with other agencies and the public." The EPA and the Army Corps said dismantling the Obama rule would not change existing practices because the measure has been stayed by the 6th Circuit U.S. Court of Appeals in Cincinnati in response to opponents' lawsuits.

Water rule rollback gives growers what they wanted from Trump

To hear John Duarte tell it, farmers knew the cavalry was coming to their rescue on election night. It's one reason agricultural areas voted heavily for Donald Trump. On Tuesday, Trump ordered his new head of the Environmental Protection Agency, Scott Pruitt, to scale back the agency's interpretation of the Clean Water Act. The 1972 law is widely credited for reversing the decline in drinking water quality nationwide by controlling pollution to navigable waters. A set of regulations known as the Waters of the U.S. rules, which extended the authority of the Clean Water Act to many small upstream tributaries and isolated wetlands, led growers to worry that a law aimed at developers and heavy industry would be applied to their ditches, canals and wetlands.