The 2020 Democratic candidates are out of the gate and the pollsters have the call! Bernie Sanders is leading by two lengths with Kamala Harris and Elizabeth Warren right behind, but Cory Booker and Beto O'Rourke are coming on fast! The political horse-race season is upon us and I bet I know what you are thinking: "Stop!" Every election we complain about horse-race coverage and every election we stay glued to it all the same. The problem with this kind of coverage is not that it's unimportant. 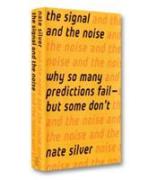 Contrary to what some data scientists may like to believe, we can never reduce the world to mere numbers and algorithms. When it comes down to it, decisions are made by humans, and being an effective data scientist means understanding both people and data. When OPower, a software company, wanted to get people to use less energy, they provided customers with plenty of stats about their electricity usage and cost.

MEGAN THOMPSON: Syrian refugee Mohamad Taleb and his 7-year-old son Obaida are learning English at this class for refugees in eastern Pennsylvania. Taleb arrived in the United States a year and a half ago with his wife and four children. They settled in Allentown, about 60 miles northwest of Philadelphia, and far from the violence at home. MOHAMAD TALEB (VOICE OF INTERPRETER): It's such a rough thing to be in the middle of war and destruction and watch children dying in front of you. You just want to escape with your children.

It's a conversation that some believe could have prevented unnecessary deaths, while others say blaming Muslims dishonors the victims, many of whom supported religious tolerance. During the presidential election that culminated in Trump's victory in November, the Republican business mogul routinely described Muslims as anti-American and won in part because of his vow after the San Bernardino massacre to crack down on Muslims both coming to and already living in the U.S. As a candidate, Trump repeated the disputed claim that Farook's neighbors saw the bombs that ultimately failed to detonate during the attack and did not report them to authorities. More recently, as president-elect, he and his potential cabinet members, including Guilani, have said they will consider implementing a Muslim registry to keep track of anyone associated with Islam. After an attack this week carried out by a Muslim student at Ohio State University, Trump tweeted: "ISIS is taking credit for the terrible stabbing attack at Ohio State University by a Somali refugee who should not have been in our country." President Barack Obama and civil liberities activists have warned that blaming all Muslims for the violence carried out by a few violates the First Amendment and will only further alienate some Americans.

This election proved you're only as good as your data

As you've probably heard, while Hillary Clinton won the majority of the popular vote, Donald Trump was awarded more than 270 votes in the Electoral College. Many, particularly on social media, were incredulous, partly at the candidates but also at the pollsters -- in particular, famous polling analysts like Nate Silver from Disney's FiveThirtyEight blog. Silver rose to fame as the guy who successfully predicted the past few presidential elections. In 2008, he correctly predicted 49 of 50 states, and in 2012 he nailed all 50. With that, plus an impressive showing in the midterms, a legend was born.