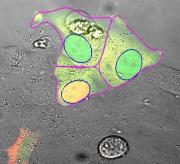 A computer system that automatically tracks the movements of proteins within a living cell has been developed by a team of biologists and computer vision experts. It could save researchers the hours often spent analysing microscope images by hand, to determine the way a cell works. The system, called CellTracker, automatically analyses a series of still digital images captured through a microscope. Doug Kell at Manchester University in UK, the lead biologist involved with the project, believes the system could dramatically speed up studies of cells' function. "Most people just fix cells [in one place], which kills their metabolism," he told New Scientist.

Novel proteins, created from scratch with no particular design in mind, can sometimes do the work of a natural protein. The discovery may widen the toolkit of synthetic biologists trying to build bespoke organisms. There are more proteins possible than there are atoms in the universe, and yet evolution has tested only a minuscule fraction of them. No one knows whether the vast, untried space of proteins includes some that could have biological uses. Until now, most researchers assembling novel proteins have meticulously selected each amino acid building block so that the resulting protein folds precisely into a pre-planned shape that closely fits the molecules it is intended to interact with.

'It will change everything': DeepMind's AI makes gigantic leap in solving protein structures

A protein's function is determined by its 3D shape.Credit: DeepMind An artificial intelligence (AI) network developed by Google AI offshoot DeepMind has made a gargantuan leap in solving one of biology's grandest challenges -- determining a protein's 3D shape from its amino-acid sequence. DeepMind's program, called AlphaFold, outperformed around 100 other teams in a biennial protein-structure prediction challenge called CASP, short for Critical Assessment of Structure Prediction. The results were announced on 30 November, at the start of the conference -- held virtually this year -- that takes stock of the exercise. "This is a big deal," says John Moult, a computational biologist at the University of Maryland in College Park, who co-founded CASP in 1994 to improve computational methods for accurately predicting protein structures. "In some sense the problem is solved."