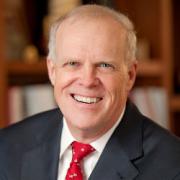 John Hennessy joined Stanford in 1977 right after receiving his Ph.D. from the State University of New York at Stony Brook. He soon became a leader of Reduced Instruction Set Computers. This research led to the founding of MIPS Computer Systems, which was later acquired for 320 million. There are still nearly a billion MIPS processors shipped annually, 30 years after the company was founded. Hennessy returned to Stanford to do foundational research in large-scale shared memory multiprocessors. In his spare time, he co-authored two textbooks on computer architecture, which have been continuously revised and are still popular 25 years later. This record led to numerous honors, including ACM Fellow, election to both the National Academy of Engineering and the National Academy of Sciences. Not resting on his research and teaching laurels, he quickly moved up the academic administrative ladder, going from the CS department chair to Engineering college dean to provost and finally to president in just seven years. He is Stanford's tenth president, its first from engineering, and he has governed it for an eighth of its existence. Since 2000, he doubled Stanford's endowment, including a record 6.2 billion for a single campaign. He used those funds to launch many initiatives--which often cross departmental lines--along with new buildings to house them. Undergraduate applications also doubled, for the first time making Stanford even more selective than Harvard. 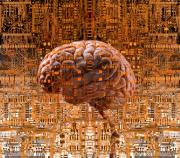 A group of researchers from the Defense Advanced Research Projects Agency is coordinating an effort to better understand the reasoning artificial intelligence algorithms use to arrive at the conclusions they make. Despite the excitement about the potential for utilizing aspects of AI for machine learning and deep learning, widespread adoption in healthcare is some ways off. A better grasp of the reasoning processes could help those efforts. David Gunning, the program manager at Darpa overseeing the project, explained its motivation in an interview with The Wall Street Journal. The project involves 100 researchers at more than 30 universities and private institutions.

Physicist Max Tegmark on the promise and pitfalls of artificial intelligence

To describe Max Tegmark's career as "storied" is to do the Swedish-American physicist a disservice. He's published more than 200 publications and developed data analysis tools for microwave background experiments. And he's been elected as a Fellow of the American Physical Society for his contributions to cosmology. In 2015, Elon Musk donated $10 million to FLI to advance research into the ethical, legal, and economic effects of AI systems. Tegmark's latest book, Life 3.0: Being Human in the Age of Artificial Intelligence, postulates that neural networks of the future may be able to redesign their own hardware and internal structure.

NPCEditor is a system for building a natural language processing component for virtual humans capable of engaging a user in spoken dialog on a limited domain. It uses statistical language classiﬁcation technology for mapping from a user’s text input to system responses. NPCEditor provides a user-friendly editor for creating effective virtual humans quickly. It has been deployed as a part of various virtual human systems in several applications.

How To Save Mankind From The New Breed Of Killer Robots

A very, very small quadcopter, one inch in diameter can carry a one- or two-gram shaped charge. You can order them from a drone manufacturer in China. You can program the code to say: "Here are thousands of photographs of the kinds of things I want to target." A one-gram shaped charge can punch a hole in nine millimeters of steel, so presumably you can also punch a hole in someone's head. You can fit about three million of those in a semi-tractor-trailer. You can drive up I-95 with three trucks and have 10 million weapons attacking New York City. They don't have to be very effective, only 5 or 10% of them have to find the target. There will be manufacturers producing millions of these weapons that people will be able to buy just like you can buy guns now, except millions of guns don't matter unless you have a million soldiers. You need only three guys to write the program and launch them. So you can just imagine that in many parts of the world humans will be hunted. They will be cowering underground in shelters and devising techniques so that they don't get detected. This is the ever-present cloud of lethal autonomous weapons. Mary Wareham laughs a lot. It usually sounds the same regardless of the circumstance -- like a mirthful giggle the blonde New Zealander can't suppress -- but it bubbles up at the most varied moments. Wareham laughs when things are funny, she laughs when things are awkward, she laughs when she disagrees with you. And she laughs when things are truly unpleasant, like when you're talking to her about how humanity might soon be annihilated by killer robots and the world is doing nothing to stop it. One afternoon this spring at the United Nations in Geneva, I sat behind Wareham in a large wood-paneled, beige-carpeted assembly room that hosted the Convention on Certain Conventional Weapons (CCW), a group of 121 countries that have signed the agreement to restrict weapons that "are considered to cause unnecessary or unjustifiable suffering to combatants or to affect civilians indiscriminately"-- in other words, weapons humanity deems too cruel to use in war. The UN moves at a glacial pace, but the CCW is even worse.