The Workshop on Logic-Based Artificial Intelligence

The Workshop on Logic-Based Artificial Intelligence (LBAI) was held in Washington, D.C., on 13 to 15 June 1999. The workshop was organized by Jack Minker and John McCarthy. Its purpose was to bring together researchers who use logic as a fundamental tool in AI to permit them to review accomplishments, assess future directions, and share their research in LBAI. 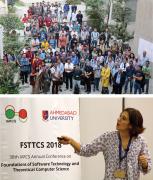 Theoretical computer science has been a vibrant part of computing research in India for the past 30 years. India has always had a strong mathematical tradition. One could also argue that in the 1980s and 1990s, theory offered a unique opportunity to keep up with international research in computing despite limited access to state-of-the-art hardware. The Annual International Conference Foundations of Software Technology and Theoretical Computer Science (FSTTCS) was launched in 1981. FSTTCS2 allowed Indian researchers a natural opportunity to interact with leading academics worldwide.