Weighing one protein with light

Mass spectrometry is a crucial tool for the identification of proteins and other biomolecules in biological samples. In recent years, methods for measuring the mass of individual molecules have been reported, but these methods cannot follow the assembly of protein complexes in real time and are limited to relatively large protein complexes. On page 423 of this issue, Young et al. (1) use light scattering to detect and measure the mass of individual unlabeled biomolecules that they had adsorbed from solution to a glass surface. The method allows for the direct detection of proteins as they assemble into functional complexes or misfolded aggregates.

In the never-ending war on insect pests, the widespread soil bacterium Bacillus thuringiensis (Bt) is one of the greatest heroes. Insecticidal crystalline (Cry) proteins and vegetative insecticidal proteins (Vips) from Bt are treasured for their effectiveness against some devastating pests and their safety for beneficial insects, wildlife, and people (1). Sprays containing Bt proteins have been used for more than 70 years and remain valuable in organic and conventional agriculture, forestry, and vector control (1). Crops genetically engineered to produce Bt proteins were introduced 20 years ago and quickly became a cornerstone of pest management. They have suppressed pest populations, reduced reliance on insecticide sprays, enhanced control by natural enemies, and increased farmer profits (2–4). 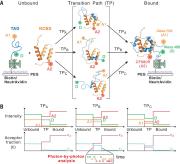 Disordered proteins often fold as they bind to a partner protein. Most methods to measure transition paths rely on monitoring a single distance, making it difficult to resolve complex pathways. Kim and Chung used fast three-color single-molecule Foster resonance energy transfer (FRET) to simultaneously probe distance changes between the two ends of an unfolded protein and between each end and a probe on the partner protein.

Proteins are macro-molecules involved in virtually all of life processes. Protein sequence and structure data is accumulated at an ever increasing rate in publicly-available databases. To extract knowledge from these databases, we need efficient and accurate tools; this is a major goal of computational structural biology. The tasks we consider are searching and mining protein data; we rely on protein fragment libraries to build more efficient tools. We describe FragBag – an example of using fragment libraries to improve protein structural search. To search for patterns in structure space, we discuss methods to generate efficient low-dimensional maps. In particular, we use these maps to identify patterns of functional diversity and sequence diversity. Finally, we discuss how to extend these methods to protein sequences. To do this, one needs to predict local structure from sequence; we survey previous work that suggests that this is a very feasible task. Furthermore, we show that such predictions can be used to improve sequence alignments. Namely, protein fragments can be used to leverage protein structural data to improve remote homology detection.

Mouse toes partially regrown after amputation thanks to two proteins

A pair of proteins could help regenerate amputated limbs. When applied to amputated toes, the proteins encouraged both bone and joint growth in mice. Joints are structurally complex, so even for animals that can regrow their lost limbs, rarely can they regenerate their joints as well. Ken Muneoka at Texas A&M University and his colleagues had previously regenerated bones in mice after they were amputated by treating the stump with a bone-growing protein, BMP2. But joint structures never formed.